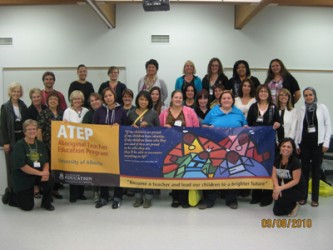 An exciting new program which allows prospective teachers to learn at a campus near their home community has brought renewed optimism to the education of Aboriginal students.

The Aboriginal Elementary Teacher Program is a product of the University of Alberta and students graduate with a bachelor degree in education, whether they study on campus in Edmonton or in one of the off-site collaborative programs.

Few Aboriginal educators are found in the northern parts of the province, said Angela Wolfe, associate director of ATEP.

“This program addresses that problem by being able to provide the final two years of the education degree from the U of A. They can study and complete it in their own home community,” said Wolfe. “They don’t have to uproot their families or cause a spouse to have to leave employment.”

The target group is teachers of First Nations, Métis, and Inuit heritage.

Partnering colleges have made available the courses required for the first two years.
“They have been diligent and fantastic in ensuring that our students are able to have them,” said Wolfe.

Often students have been teacher aides within the community as well so already have considerable classroom experience.

Both Wolfe and colleague Dr. Evelyn Steinhauer, director of the program, have come though the educational system themselves on their way to being Aboriginal educators so they were pleased to be a part of the innovative new program.

Currently the program is running at Portage College in Lac La Biche and Cold Lake, and will begin soon in Northern Lakes College in Grouard and Wasbasca. Over the next year or two it will extend to Blue Quills First Nations College in St. Paul.

“Then hopefully, we’ll be able to start offering it at Muskwachees Cultural College in Hobbema,” Wolfe said.  “That’s as far south as we’ll go as the need is more urgent in the north.”

Many successful educators have already graduated from the program.

“I believe the communities are richer for it,” said Wolfe.
There are many dedicated non-Aboriginal teachers filling positions right now, said Wolfe, but having an Aboriginal educator at the head of the classroom provides numerous advantages, especially at the elementary level.
“(Students) come to school and see someone with whom they feel a belonging,” said Wolfe. Those youngsters who may be considering teaching as a profession will realize that their goals and dreams are attainable.

Teaching from an Aboriginal perspective is the key to success.

“And because it’s a collaborative off-campus program, the cutting edge technology delivery that is available today makes it possible to have online conferences,” said Wolfe. “The success of the students in the program will have a ripple effect throughout the whole community.”