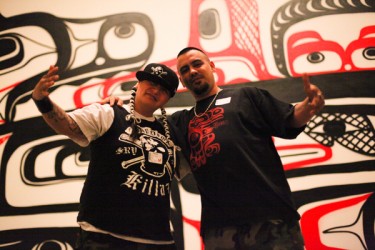 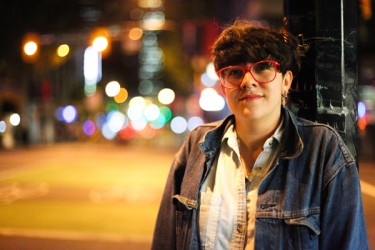 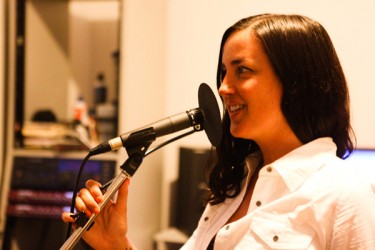 With no album, radio play or front-person to fall back on, Beat Nation Live is hard to quantify: A musical trickster of sorts.

The live hip-hop shows are electrifying. This all-Indigenous crew, from nations across Turtle Island, spit rhymes as other members create traditional-style art with both spray paint and iPads on digital screens. They’ve made themselves at home everywhere from Aboriginal arts festivals to the banks of Paris’ Seine River.
“To me, Beat Nation was always a representation of what is actually going on: Native youth embracing hip-hop as a way of having a voice in their communities and in the wider arena of mainstream culture,” explained Tania Willard, one of the Beat Nation band’s creators and co-curator of a rap-infused art gallery exhibit of the same name.

“There was some controversy around the idea of using hip-hop in that way.

“Is it not very traditional to Native culture? If you Google hip-hop dance competitions at powwows, the comments on Youtube are in the thousands. There is some controversy there. For us, it’s what makes the work interesting. It’s not new for Native people to have other kinds of influences. I think we’re just seeing that same tendency in young artists today – that tendency to pull on tradition and what they know, and honour their backgrounds, as well as use new materials and new media.”

“I’m always looking for opportunities where I can work in group settings.

“Indigenous people have shaped the face of hip-hop in Canada. You can really see that it’s an important part of how we’re growing. To have a project like this, that’s put together as an international arts initiative with the incentive of being progressive, new, and going into new territories, that’s so different than how Native people often think of themselves.”

For Cris Derksen, a half-Cree cellist who adds a distinct, beat-driven sound with loop pedals, live self-recorded rhythms and her bittersweet, ardent instrumentals–but who has also accompanied mega-rapper Kanye West for Vancouver gigs–a pinnacle moment for Beat Nation Live was the group’s European tour in 2011.

“It was amazing,” she tells Windspeaker just before taking the stage for a solo set in a Vancouver bar. “There was a whole bunch of Indians running around Paris!

“The very last night we were in Paris, we went out for a really nice dinner all together. It was quintessentially French. there was an accordion player playing love songs… It made it easier to become a family. You have to learn to trust the other people you’re working with.”

“It was good old times, hangin’ out on the Seine!” he chuckles.
Healey jumps in, laughing, as she imagines what the Old World urbanites thought of an all-Native rap crew turning up amidst the cobble-stone streets and ancient cathedrals.

“Savages roll up,” she muses sarcastically, with a mischievous grin.

“It’s a gateway or showcase to the world, for people interested in First Nations youth culture,” Bulpitt adds. “A lot of First Nations have turned to hip-hop, because of the similarities. The dance music and art being culturally relevant to our lives.

“What got me into hip-hop, subconsciously almost, were the similarities between that and the Native [culture]. Youth now have nowhere to turn. In the old days, you had traditional songs; people would be together in a dance group and know these moves, people uniting to become something better. Beat Nation is just a way to express this. It’s a more visual and in-your-face performance. We’re bringing traditional art and contemporary methods of today and fusing them together.”

Paul Armstrong, Beat Nation Live’s manager, is a vital force to the group. Though not visible on stage, he helped turn Willard and Reese’s vision into a ground-breaking celebration of the importance of hip-hop in Aboriginal youth cultures.

“It’s completely interactive. That’s the big thing, interacting with other artists across disciplines,” he tells Windspeaker. “This has been building; Ab hip-hop is breaking all over. It’s really got its own voice.

“The cool thing about it is–for these guys who are all used to working as individual artists–you put them together and they can actually take more risks, because they’re supported. Not only does the creativity multiply exponentially, which I see every time we bring the collective out, but it becomes a whole different thing, a whole new direction. We try to keep Beat Nation on an experimental basis. We don’t want it to solidify; I’m not trying to create a commercial product we can then move out. It’s about taking what’s happening with these guys and just letting them expand it at their own rate. The minute you solidify something into a commercial entity, it’s dead.”

Each Beat Nation member has their own unique trajectory: Video artist Jackson 2Bears speaks and performs internationally; Starr’s pop-driven melodies and sensual lyrics get radio play; Derksen was sought out by CBC for its Eight Fire series on Aboriginal artists across the land, just to name three of the crew’s members.

But underneath each of their work, understanding hip-hop as a language of alienation, social protest and urban lifestyle is essential to understand many Native youth’s experiences today, whether on the rez or in the city.

“The rad thing about hip hop is that it’s so damn popular in the Aboriginal community,” Derksen says. “It’s an easy way to reach Aboriginal youth.

“There’s a big movement happening right now of Indigenous people my age and younger who are completely immersing contemporary ideas with traditional sounds... It’s a really exciting thing to be on the cusp of something.”

Currently, Beat Nation Live is collaborating with a German DJ to remix their music in hopes of making another European pilgrimage next year.