Join the circle - the history and lore of the Round Dance 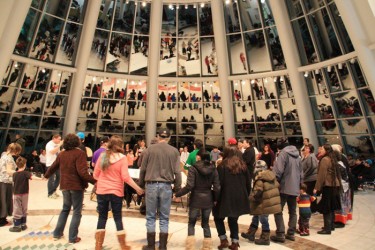 There's a nice little story going around Native campfires these days about two very wise men, a venerable Elder and a famous Canadian scientist, each with his own way of looking at the nature of things.

The Elder had asked the scientist to talk about the Northern Lights. What were the electric flashing colors of the Aurora Borealis all about? After patiently listening to a scientific description of what was supposed to be happening up there in the darkest reaches of the northern sky, the Elder then gave his side of the story, a tale full of ancient wisdom, strong medicine and an even stronger message of spiritual solidarity.

He explained that the dancing lights were powerful guardian spirits, the spirits of ancestors round dancing across the northern sky, weaving their way through the black of the night, moving in harmony with the eternal rhythms of Father Sky and Mother Earth.

And then he showed this man of science how a real shaman could call the dancing lights down by chanting and rubbing his fingernails together in a fast clicking motion.

And it is said that the lights came down, touched the shaman and shook the scientist to the core of his being. From that day forth the scientist became a believer and champion of Native spirituality.

There's a lot of folklore and stories about the round dance of the Plains Cree. Also called the tea dance and braid bundle dance, the question is whether it is a fairly modern part of Aboriginal celebrations or as ancient as time itself.

The braids of deceased relatives, kept in sacred bundles, were central to the meaning of the round dance ceremonies, which also included pipe, food and cloth offerings for the spirits of the dead.

Special honor songs were sung and prayers offered as the drums were passed through the sweetgrass smoke. A young sappling was set up in the centre of the lodge to be hung with cloth offerings, and a large stone is placed at its base.

The round dancing continued through the night; food and drink were passed around, and, sometimes, a young dancer would cover his face with a blanket and pretend to be a ghost, providing much welcome comic relief for the solemn occasion.

After contact with European cultures, when Aboriginal populations dwindled and eventually became centralized on reserves and settlements, the round dance increased in popularity and size, absorbing many of the ancient dances and rituals into what we now know as the modern- day round dance.

And, with its evolution from lodge poles, tea and sacrifices, to the present day rituals of song dance and drum, the modern-day round dance has taken on a life of its own, becoming what is probably the most intimate and communal expression of Aboriginal spirituality.

From the first tuning of the hand drums (by way of fire), to the fun of meeting old friends and making new, a round dance is for everyone, children, parents, Elders and lovers. A time to swap stories, catch up on the latest news, break bannock, and share some tea and tobacco. And even better, to hear both the old and new songs sung in Plains and Woodland Cree. It's a time to honor traditions and memories of ancestors dancing around their starry campfires, flickering against the dark blanket of the night sky.