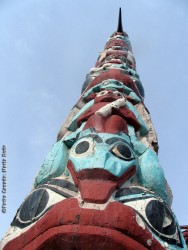 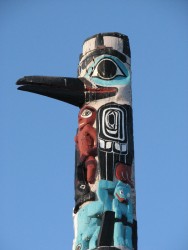 Out with the old, in with the new.
A 140-year-old raven totem pole that was erected in Jasper National Park in Alberta 90 years ago has made its way home to the people of Haida Gwaii in Old Massett, B.C. The Haida Nation is in the process of carving a new totem for the city of Jasper, which is expected to make its debut next spring.

As a feature of Jasper National Park for about a century, regular visitors and residents of the Rocky Mountain town miss the 70-foot totem, which left for Prince George on June 16.

“I’m a Jasperite so I have a connection to the pole,” said Lori Dowling, Jasper totem pole project coordinator. “People who used to live in Jasper have made a point in coming out and saying goodbye to the pole.”

Originally carved for the family of Massett Haida people in what was known until very recently as the Queen Charlotte Islands, now officially Haida Gwaii, off the coast of B.C., the totem was shipped to Jasper in 1919.

In 2009, Parks Canada took down the iconic totem after it had become a safety hazard due to weathering that had worn away at the base of the structure. That same year, they commissioned the Council of the Haida Nation to replace the original raven totem.

As the first totem makes its way back to Old Massett by train, two Haida carvers–Gwaai and Jaalene Edenshaw-are in the process of carving the replacement.
The Haida Nation is thrilled to welcome home a historic treasure; however, they want it back under specific conditions.

“The Haida were happy to take it back, but they didn’t want all the paint on it,” said Dowling, adding that the totem in original form was a natural wood. The totem had been painted once it arrived in Alberta.

“Some of the paint they chose wasn’t appropriate to the Haida culture,” said Vince Collison, coordinator for the Haida Nation in Old Massett.

Parks Canada shipped the Raven totem to Vancouver in order to remove the paint and restore some of the damaged areas.

Collison said once the totem arrived back in his community, it would be placed in the middle of the village near the fire hall. Due to the significant weathering of the carving it cannot be erected.

In traditional Haida culture when a totem falls to the ground it is left alone and taken back by the earth, then a new totem is carved in its place. It is believed that the deterioration of the pole is representative of natural processes of decay and death that occur with all living things, and attempts to prevent this are seen as somehow denying or ignoring the nature of the world.
“That kind of freaks the museum people out because they are used to preserving everything and making sure everything will last forever,” said Collison.

Throughout history, totem poles have been an artistic tool to track the genealogy of a tribe or used as a memorial. They vary in size, and animals are often carved into the wood structure as helping spirits.
Collison said pre-contact the Haida Gwaii population thrived with dozens of towns dispersed throughout the island. Totem poles were often seen on the property of most families.

To this day there are conflicting stories about how Jasper acquired the raven totem. Some believe the Raven Totem was gifted by the Haida to the city of Jasper, others are convinced it was taken from Old Massett without permission.

Parks Canada has taken this opportunity to share the rich heritage of the Haida people by touring the totem with Haida representatives who are able to share the story of their people. The stops included Kamloops, Calgary and St. Albert.

“We’re really happy to form this relationship with Parks Canada. They’ve been really good partners in trying to relate the story as best as they possibly could,” said Collison.