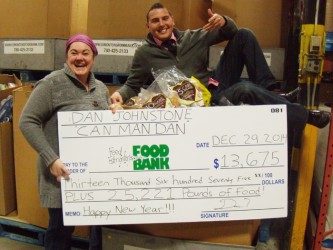 Food, money raised to feed those in need

By camping out twice in a food bank truck 24 hours a day for a total of 143 hours, Can Man Dan Johnstone raised 11,440 kilograms and $13,675 for the Edmonton Food Bank. Johnstone, an antipoverty activist, philanthropist, and community organizer, braved the cold weather Dec. 4-7 at the Safeway at Southgate Centre and was blessed with milder weather at Southbrook Sobeys on Dec. 22-24 in his deed. Johnstone started his work in June 2011 when he began going door-to-door collecting food donations. After growing up in a single parent, low income household, Johnstone was motivated to support the same services that his family had needed. Johnstone says his goal is to help bring awareness and ultimately assist in ending poverty and homelessness. Approximately 15,000 people are assisted each month by the Edmonton Food Bank’s hamper program. In November 2013, the food bank fed 13,870 people through hampers; in November 2014, that number jumped to 14,964. “We’ve seen an increase in food bank usage across the city throughout the last year with our hamper programs as well as the meal and snack programs,” said Executive Director Marjorie Bencz. Donations and food were collected at Candy Cane Lane, the CP Holiday Train, Tom Jackson’s Huron Carole at the Jubilee Auditorium, and a variety of other events.

Local First Nation’s artist Aaron Paquette designed this year’s Human Rights award which was presented to Marni Panas, Amarjeet Sohi, Velvet Martin, Mohamed El Daly and Brianna Olson, all advocates for strengthening the fabric of Edmonton around transgender rights, youth poverty, multiculturalism, children’s rights and environmental rights. The city’s eighth annual awards was highlighted by keynote speaker Dr. Cindy Blackstock, as associate professor at the University of Alberta and executive director of the First Nations Child and Family Caring Society, which is awaiting a decision by the Canadian Human Rights Commission on the treatment of children on reserve by the federal government. The award is presented annually by the John Humphrey Centre on International Human Rights Day, Dec. 10.

A pilot project undertaken by Boyle Street Community Services is helping First Nations people living in the inner city acquire their treaty cards. The federal government has teamed up with the community organization to help work through the red tape and hold information sessions at the Boyle Street building. The majority of clients at Boyle Street are Aboriginal but only a small percentage have their status card, which brings significant benefits like access to federal health programs and help with medication costs.

Raising the Roof campaign coming to an end

The last leg of Homeward Trust Edmonton’s Raising the Roof campaign is underway. Money raised through the sale of Raising the Roof toques and socks will be donated to local homeless youth initiatives. The final sales will occur at Kingsway Mall (Jan. 27), City Hall at the farmer’s market on Jan. 31, and Toque Tuesday, Feb. 3, at Kingsway Mall, Scotia Place, the downtown LRT stations.