Cultural protocols, changing with the times? 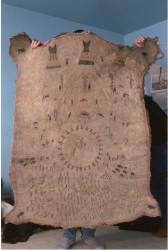 Yesterday via facebook we asked a question to those that are Blackfoot and are culturally aware... if one needs the rights to paint on buffalo skulls and robes/hides.

I received the following answer from James Dempsey, son of Hugh and Pauline Dempsey, who wrote a thesis on painted buffalo robes. James is from the Kainai.

You are talking about a number of ceremonies. The right to paint on a skull is usually connected to the Sundance, a buffalo skull is the centre piece but with robes it depends on what is going on it.

Here I believe it might be religious representations, not war ones, and permission is needed. If we are talking about war robes, no transfer is necessary, it is like the symbols are public property.

Winter counts were usually one symbol that represented the year and was done by the band historian, this person usually had a standing in the community and therefore an overall right to deal with winter counts.

They may have been connected to the beaver bundle, which was considered to be the main bundle of the Blackfoot.

However, one must always consider that times change and so do protocols.

It clears up a lot of questions I had... and makes sense.... I guess protocols do change with time... since the beginning of time.