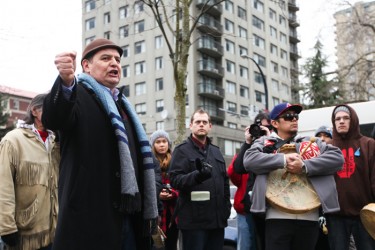 More than 1,000 people protested against the controversial Enbridge Northern Gateway project as its public hearings moved to Vancouver on Jan. 14, the largest anti-pipeline demonstration since the 4,000-strong “Defend Our Coast” protests in Victoria last October.

The next day, five demonstrators were arrested inside the hearings, where they blew whistles and spread “Climate Crime Scene” tape in defiance of the National Energy Board’s (NEB) decision to close proceedings to the public. NEB instead video-streamed the hearing in a separate chamber to avoid protests.
“After the huge demo... a few of us decided it was disappointing not to get in,” said Kim Heartty, one of those arrested. She has since had her assault by trespass charges dropped.

“The reason we did it was to further expose the illegitimacy of the hearing process because, of course, when the public gets arrested for going to a public hearing, that really speaks to how undemocratic it is.... It signified an escalation and a continuation of the resistance to the hearings.”

Later this year, the NEB’s Joint Review Process will make recommendations about Enbridge’s proposed $5.5 billion, 1,172-kilometre Northern Gateway pipeline, a project which would transport diluted bitumen from the oil sands in Alberta to a tanker port in Kitimat, B.C.

With environmental organizations gearing up for civil disobedience to stop the project, which they say has too great a risk of oil spills, supertanker accidents, and climate change, the latest demonstration also rallied against last year’s federal omnibus legislation, which stripped the NEB of its binding decision-making at the end of industrial reviews, allowing for a federal veto.

But with First Nations in the province vowing to put their bodies on the line to create an “unbreakable wall” against the proposal, Heartty said the joint review hearings are irrelevant, since Indigenous peoples have never given their consent any way. A spokesperson for the anti-pipeline Yinka Dene Alliance agreed.
“This pipeline is not going to be built, regardless of what they say,” said Chief Jackie Thomas of Saik’uz First Nation. “Our waters, our salmon, our animals and the plant base our people still depend on, as a normal practice and a preferred way of life, are at risk; that risk is too great from oil.

“The people in my community have decided no... If the proposed pipeline gets built, they’re going to increase oil sands production by 30 per cent, so it affects the tar sands, it affects us right here on our land, and it will affect the coast. It’s all connected.”

Outside the hearings, Frank Brown of Heiltsuk First Nation told a crowd of Idle No More demonstrators that Enbridge is a major threat to the land.

“From the beginning of time, since the Creator put our ancestors down on the Earth, as a Heiltsuk, our continuous occupation of our lands goes back 10,000 years,” he said. “We would like to continue to be here for another 10,000 years, not only for ourselves, but for the rest of Canada to do things in a more sustainable way. We can’t just keep taking and taking and taking. We know this isn’t sustainable.”

Nearby, earlier demonstrators had erected a large white plastic whale–which they named “Hope –visible to the hearings. Passersby paused to scribble messages about sustainability, respect and future generations on its sides.

Several floors above, the NEB’s hearings continued their months-long tour of the province, where hundreds of residents have testified, the majority against the proposal. Some First Nations have not participated in a process they see as illegitimate, while others have used the opportunity to share histories, cultural knowledge, and way of life with the three joint review panelists.

Though Enbridge has been represented by observers at the hearings, the company has pumped millions of dollars into a large-scale advertising campaign to promote its project to the public.

“New pipeline capacity is critical for Canada’s economic health and should be a ‘national priority,’” wrote company spokesperson Janet Holder, Enbridge’s executive vice president Western Access, in a December article. “Building the energy infrastructure necessary to promote fair-market value for our most lucrative commodity is in everyone’s best interests.

“It creates jobs, boosts economic development and government revenues which are essential to supporting the services we rely on such as education, health care and infrastructure.”

As the NEB hearings moved into a new phase in late January, hearing testimony specifically on spill risks and tanker accidents–and with B.C. preparing for a May provincial election which has seen the pipeline bantered about as a campaign issue–the opposition grows as opinion polls show an increasingly skeptical public.

But with uncertainty over whether the board’s recommendations will even be heeded by the federal government, many are vowing to stop the project with an increasingly unwavering resolve.

“If necessary, we will take both legal means and other means necessary to ensure we protect the traditional territories from which we come,” Brown said. “Why should we let quarterly profit margins dictate the future of not only First Nations, but of humanity?”