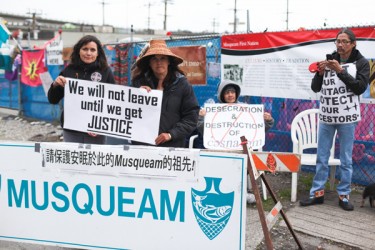 After an urban protest camp was set up that lasted several hundred days, British Columbia has revoked permits for a five-storey condominium project that was set to be built on top of the ancient Coast Salish village of c’esna?e m.

“The B.C. government has made a final decision on two permits issued under the Heritage Conservation Act for a private property ... known as the Marpole Midden site,” the Ministry of Forests, Lands and Natural Resource Operations said in a Sept. 28 statement. “The decision to allow the permits to expire after weeks of extensions is appropriate, given the lack of progress in the negotiations between the developer and the Musqueam Indian Band around the purchase of the property.”

A spokesperson for the Musqueam blockade, which maintained a non-stop sacred fire since last March, and escalated to a brief take-over of the busy Arthur Laing Bridge on May 31, told Raven’s Eye that the permit reversal represents an inspiring victory for the community.

“This was a huge win having the Crown reverse their decision,” said Cecilia Point. “This area is a well-known burial site.

“We are still going to purchase the property... We’re hoping to have a nice, open green space here. We’ll definitely put up markers letting people know it’s a graveyard, and put signage about the historic significance of this place.”
Point said that the key element of protecting c’YsnaîYm village was a widespread show of solidarity, not only from neighbouring First Nations, but from unions, non-Aboriginal cultural organizations and elected officials alike.
“To me, it was a fabulous show of solidarity,” she explained. “And it really made us all come together.
“Even in our community–like in a lot of communities–there are factions and infighting. This cause brought our own community together. There were other tribes we used to war with standing with us. The Crown always tried to pit us against each other–the Squamish, Tsleil-Waututh and Musqueam–we’ve had infighting over who owns what. But we came together over this.”

With Vancouver’s Mayor Gregor Robertson bicycling to the protest to show his support, along with City Councillor Andrea Reimer, following the highly-publicized bridge blockade, and Chinese, Indian and Jewish groups lobbying on Musqueam’s behalf, Point said her nation now owes support to other communities struggling to preserve their heritage.

“We had a lot of organizations who petitioned on our behalf, like the BC Teachers Federation, and I was invited to speak at synagogues and on Radio India,” Point said. “We reached out to a lot of larger communities who said this is not okay with them [...]. For this to happen in a major city was the turning point.”

But the developer expressed outrage at the province’s refusal to renew the project’s permits, saying that protecting heritage sites–including burial grounds and ancient villages–requires landowners to be compensated for their expropriation.

“It’s pretty clear to the government that we’re not happy with the decision they made,” Bob Ransford, a spokesperson for Century Group, told Raven’s Eye. “If you can’t alter it in any way, you have no ability to use the property whatsoever; normally, if that happens, they designate it as a heritage site.

Ransford warned that the way B.C. made its decision–simply denying digging and archaeological permits after the project had begun–fails to respect the rights of private property owners. He called the move a “dangerous precedent” that should have instead followed standard procedure in a region dotted with heritage sites.

“The lower Fraser [Valley] has a lot of archaeological potential, because the land was settled by First People here for long time,” he said. “This isn’t new.

“I’m puzzled… We’re considering all of our options.”

Point said that she has little sympathy for the developer or landowner’s complaints, considering the history of land stolen from First Nations in a province almost entirely unceded, with few treaties.
“The developer has been crying the blues all weekend because the permits were only lifted last night,” she said. “[They’re] saying, ‘Now our land is worthless, it’s been expropriated.’

“Where have I heard that before? Oh, the irony! Now they have to get all their stuff off the property. They have unearthed bodies here we need to reinter.”

Point said that Musqueam Indian Band still wants to purchase the property from its owner at market value, but said they and the developer are “still miles apart on what they want and what we’re willing to pay for it.”

Until Nov. 1, when the developer must restore the site to its original state, Musqueam members are maintaining a presence nearby–albeit a small one–and the sacred fire barrel remains lit.