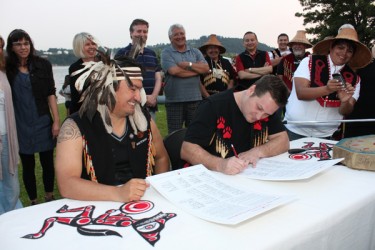 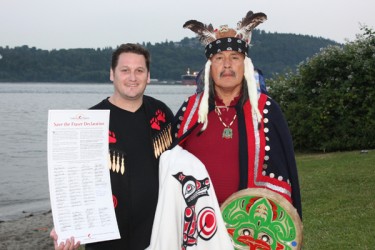 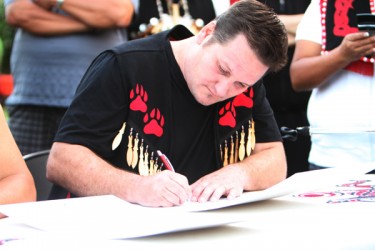 A 130-nation-strong declaration of Indigenous law–pledging a united front in the escalating fight against oil sands pipelines–grew two Indigenous communities stronger on July 7.

At a signing ceremony and feast attended by several hundred people—representing a number of First Nations, as well as Vancouver city councillors and opposition Members of Parliament—B.C.’s Squamish and Tsleil-Waututh Nations joined the historic inter-tribal Save the Fraser Declaration.

“What our Elders told us as a council is ‘Enough is enough’,” said Tsleil-Waututh Chief Justin George at the event. “It’s our Aboriginal rights and title that stops this madness.

Participants shared in a feast of freshly caught crab, fish chowder and other seafood, and observed a solemn ceremony where leaders in traditional regalia signed the declaration.

With growing controversy spiralling around Enbridge’s proposed Northern Gateway pipeline and a planned expansion of Kinder Morgan’s existing Trans Mountain Pipeline, the declaration presents another headache for both the federal government and companies backing the projects.

A founding leader behind the Save the Fraser Declaration–Saik’uz First Nation Chief Jackie Thomas—welcomed the Tsleil-Waututh as members of the blossoming anti-pipelines alliance. She expressed pride that Indigenous peoples are using “our laws” to stop pollution risks and pledged to “defend our decision using all the means at our disposal.”

“It started out with just two communities working together,” she told Raven’s Eye. “The next thing you know, there was five of us... By December 2010, there were 61 – and it just keeps growing.

“We all understand the need for water. That’s what the Save the Fraser Declaration was about–to ensure we have enough water in the future. I still hunt and fish; I still gather like a lot of our people... We still depend on that basic staple diet, our fish, our moose, and our berries. That’s really what this is all about, to make sure we don’t damage that.”

Chief George spoke to the gathering about the impacts on his 500-member community–and other Coast Salish peoples–of a 2007 pipeline rupture that dumped 234,000 litres of crude into Burrard Inlet. It “was a huge eye-opener” for his nation, he said.

As well as opposing tar sands pipelines through Indigenous traditional territories, the declaration also bans oil tankers anywhere in the migration routes of Fraser River salmon, and the entire length of B.C.’s coast. A statement released by the Tsleil-Waututh described the document as an “unbroken chain from the U.S. border to the Arctic Ocean.”

Although the Save the Fraser Declaration is technically not recognized under Canadian law, its basis in Aboriginal laws adds weight to Indigenous opposition to the Alberta oil sands and their associated export pipelines and ocean tankers, most of which would transport bitumen to Asia. The Tsleil-Waututh signature effectively creates a wall of opposition from north to south, making it difficult–or even impossible–for the federal government to gain Aboriginal consent to the pipeline proposals.

The signing ceremony was formally witnessed by Vancouver city councillors Adriane Carr and Andrea Reimer, as well as New Democrat MP Kennedy Stewart, all of whom have opposed the pipeline projects.

The national chief of the Assembly of First Nations Shawn Atleo sent a statement of support which was read out during the ceremony.

“I extend my full support for the exercise of your rights and responsibilities,” Atleo wrote. “I applaud your efforts to protect your pristine environment, the critical habitat of the salmon, and the entire river system of the Pacific North Coast from the threat of oil spills and other harm posed by oil pipeline development and expansion.”

But Enbridge said that First Nations are not universally opposed to the project; that many Aboriginal people along the Northern Gateway route have accepted a 10 per cent stake in the project’s estimated $5.5 billion investment.

“We’re pleased to confirm that, as of the deadline, a majority of the groups eligible to participate as equity owners have signed up to do so ... almost 60 per cent of eligible Aboriginal communities along the proposed right of way, representing 60 per cent of the First Nations’ population,” the company said in a statement.

Following a series of oil spills in Michigan and Alberta, the firm said it has improved safety and remains committed to protecting the environment along its transportation routes.

“We are in the very early stages of our comprehensive studies and engagement program for the proposed expansion,” Ian Anderson, president of Kinder Morgan Canada, said in a statement. “We have a lot of work ahead of us as we talk with landowners, Aboriginal groups, communities and stakeholders.

“We value this discussion and consider it critical to our planning. We will carefully consider the input received during the extensive period of study and dialogue in our project plans.”