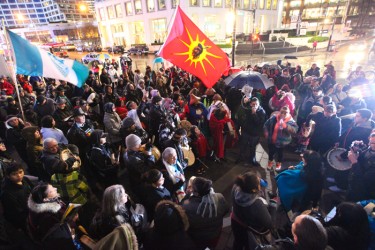 Court cases continue for 10 protesters after controversy over logging on B.C.’s Sunshine Coast escalated to an injunction and arrests on Dec. 7.

The protesters–including 79-year-old shÌsh·lh nation elder Xwu’p’a’lich (Barb Higgins), who was one of those arrested–argue that logging by the Sunshine Coast Community Forest (SCCF) threatens a thriving ecosystem, and they want an investigation into the SCCF’s forestry practices.

“This is the second time this coast has had such a brutal logging spree on it,” she told Raven’s Eye. “They’ve taken millions of dollars of logs out of B.C. You can’t go on doing that forever.

“When I first went up Mount Elphinstone, I couldn’t believe it. It’s like a spiritual experience when you walk in there. I don’t see how loggers could go in there and just drool at cutting down a tree like that. Our band gave them a contract to let them log in four areas. I don’t blame my band. When you look at this from the big picture, this is Sechelt land.”

Xwu’p’a’lich said she has found several rare medicinal plants in the area slated for logging, including ooaakslie (pronounced “oo-ack-sally”) and rattlesnake plantain, and she described the forest as thick with water-logged moss and old trees. Salmon spawning beds are also a concern to protesters.

“Your feet feel like they’re walking on a big sponge,” she said.
“There are probably five or six different kinds of mosses that grow there that retain the waters.... It’s like a great big reservoir. The moss and trees themselves hold that water. There are plants up there that are medicinal plants I haven’t found anywhere on Sunshine Coast.

“They like to say it’s not an old-growth forest, but it is. It’s low elevation old-growth. One hundred and thirty years ago a fire burned through, but it didn’t burn the oldest trees.”

Chief Garry Feschuk said SCCF consulted Shishálh nation, whose land use plan allows logging in the areas facing protesters.
“I understand where they’re coming from,” he said. “But them saying they speak for the band, I don’t know how true that is.
“We have a self-government agreement with the province, and we have elected leadership who speak for the band... I did meet with the Elders, and told them that we’re working on a bigger picture: we’re going through litigation, we’re seeking title over the whole territory.”

Meanwhile, band archaeologist, Elders and researchers signed off on cutting outside their watershed, Feschuk explained: “We’re not supporting the Community Forest. We have our own issues with the government around the Community Forest. But on those blocks, we did go through a consultation process.”

For the chair and president of the SCCF, Glen Bonderud, the band council’s support for his operations–which are governed by a community board of directors–and environmental assessments are support enough to continue logging.

“We have a protocol signed with the Sechelt Indian Band,” he said. “They signed off on our cut; it’s not like we went against them.

“We advise them, they look through and do archaeological studies in case anything comes up–like gravesites or culturally modified trees. They have the right to say, ‘We want to change this.’”

He said that the “peace camp” activists have not been satisfied with SCCF efforts to reduce their environmental impacts, or engage with the local community. But the issue is more complex than simply environment-versus-logging.

“It’s not a David and Goliath thing at all… We hope we’re through the worst part. Hopefully we won’t have to go back to confrontational stuff, but you never know.”

Xwu’p’a’lich decided to support the peace camp protest after a spiritual vision of her great-grandmother, who encouraged her to protect her nation’s territory–even without the band council’s support.

“Some will think I’m weird, nuts, crazy–all those other adjectives,” she said, chuckling. “But the Creator said to do it, so I did it.

“I was at my computer writing and heard my great-grandmother saying, ‘Mena!’ She died in 1954. No one was there. Another minute or so passed, and I felt her hand on my shoulder. I looked, and she was standing there. She said, ‘The time is now; stand and hold.’”

Xwu’p’a’lich went up to the Mount Elphinstone protest camp and requested four “warriors” to place flags the four colours of the medicine wheel–red, yellow, black and white–in the directions around the mountain, she baked a salmon and held a ceremony declaring the land Sechelt territory.

“‘I’m coming here to do some work,’” she told the protesters. “‘This is Sechelt territory, and I want to reassert our right. I want to put up flags saying this is Sechelt land.’”