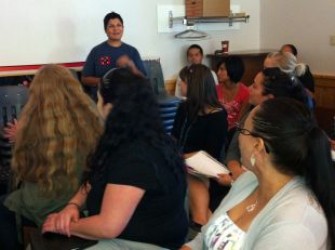 Forty-one years ago Lynn Thompson was stolen from off the Pine Creek First Nation in Manitoba.

“We were told by our grandparents, if white people come around, you run in to the bush,” said Thompson.

But the three-year-old could not run fast enough and she and her two sisters, one of whom she carried on her back and the other she was pulling, were apprehended by social workers. Her eight-year-old uncle, who kicked the men who were taking her, was also grabbed.
Thompson‘s three older brothers made it to the bush safely. Thompson would be 40 before she reunited with members of her biological family, but they still remain strangers to her.

Thompson was one of a conservatively estimated 20,000 children who were apprehended in the 1960s through to the 1980s. The “60s Scoop,” as this action became known because the majority of children were taken in the first decade, was a government-sanctioned program entitled Adopt Indian/Métis children. These Aboriginal children were placed in foster homes throughout Canada and the United States. Thompson said the uncle who tried to rescue her was sold for $500 to a family in the US. What ensued for Thompson were 25 foster homes in Ontario and Manitoba by the time she was eight years old and two failed adoption attempts. Like many of the children in her situation, she was abused. Eventually, she ended up being settled in a German Mennonite community in Manitoba. Seventy per cent of the children taken were placed in non-Aboriginal homes.

“I would have given anything to have been in a residential school, to have other brown faces around,” said Thompson, who shot herself while in care.

The pain of Thompson’s childhood, which she classifies as “pretty messed,” followed her into adulthood.

Twelve years ago, Thompson accompanied a partner to Saskatchewan. Shortly after arriving in that province, she contracted HIV through intravenous drug use.

“I wouldn’t say I was a regular user. It was just something I experimented with and I ended up contracting HIV,” she said.

That was when she took control of her life.

“With HIV, it’s either fight or flight. I chose to fight. I educated myself,” said Thompson who spent two years learning all there was to know about the virus. She turned away from modern medicine and treated herself with a traditional tea and is also under the care of a healer from Beardy’s and Okemasis First Nation.

“I’m kind of the White Buffalo of HIV. I’m the only one I know of in Canada that uses traditional meds (for HIV),” said Thompson. “Instead of getting sicker, I’m getting better.”

But she didn’t stop there. Nine years ago, Thompson became an advocate for those suffering from the virus, fighting against the stigma and discrimination HIV-positive people experience every day.

Saskatoon, where Thompson lives, and Prince Albert have the highest cases of HIV in the country. Young women present the highest numbers, contracting the virus through intravenous drug use. But in the next few years, Thompson expects to see those figures skewed as a larger number of older men become HIV-positive through unsafe sex. Thompson said men are paying $20 or $30 extra to do the act without a condom.

Thompson has amassed an impressive resume. She serves as consultant for such organizations as Persons Living With AIDS Network and AIDS Saskatoon; has been an advisor for working groups such as All Nations Hope Network and Public Health Canada; has spoken in schools both in the Saskatoon Public School system and Saskatchewan First Nations; has participated in the documentaries “Positive Women” (for Canadian AIDS Law Society) and “Silent Epidemic” (Indigenous Circle); and has written articles and been interviewed for various television programs.

Thompson is also one of two women named in a class action lawsuit launched last year against the federal government in the Court of Queen’s Bench in Regina. She and Valery Longman represent other First Nations and Metis children targeted in the “60s Scoop.”

For the past 15 years, Thompson has been collecting information and stories from and about children taken from their homes in this manner. After she was reunited with her youngest sister, who broke her back after running away from a foster home in the US, Thompson and others realized something needed to be done. It was then that a lawsuit was discussed.

Thompson is hopeful that the lawsuit can lead to support similar to what residential school survivors have received through the Indian Residential School Settlement Agreement. She also hopes it makes Canadians aware of another dark part of Canadian history.