Afghanistan experience will shape future for soldier when he returns 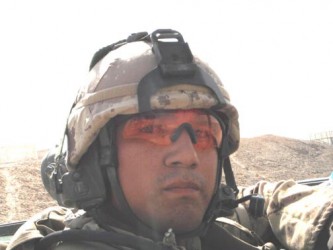 Capt. Evan Taypotat will take his experiences from serving in Kandahar into the classroom when he returns to Kahkewistahaw First Nation after his deployment.

Taypotat is one of approximately 900 soldiers, who makes up the mission transition task force assisting with the Canadian Forces’ withdrawal from Afghanistan.

Canada must be out of the Kandahar region by Dec 31, 2011. Several months ago dispersal of equipment, such as armoured vehicles, weapons, tents, and computers, as well as clothing, began. The Canadian soldiers used the NATO base for the past 10 years and everything must be moved home, sold to other armies in Afghanistan, or given to the local population. The equipment must be inventoried, cleaned, packaged and delivered.

But when the Canadians go home, there will still be physical reminders of Canada’s presence. Remaining behind will be schools, housing structures, wells to supply potable running water, roads and the Dahla Dam. There will also be the gratitude and respect of the locals for the Canadian Forces.

“I think the legacy that Canadians are leaving will be of a hard-working and friendly army.  With that being said, we must also remember the 157 Canadian personnel that died during the conflict in Afghanistan as they died trying to help build a better and safer country for the locals,” said Taypotat.

It was that same desire that pushed Taypotat along the way from his southeastern Saskatchewan First Nation. The Cree infantry officer’s journey took him through the Bold Eagle program in 1998, University of Saskatchewan’s Faculty of Education program and military officer training in CFB Gagetown, New Brunswick. He is currently stationed with the 1st Battalion Princess Patricia’s Canadian Light Infantry at CFB Edmonton.
Afghanistan put Taypotat outside of his comfort zone like he knew it would. But he acclimatized to conditions however different from home.

“I do not see much comparison as where I come from. We can easily live a day-to-day life without much assistance. In Afghanistan they do not have such things as power, social assistance, running water, sewage system, doctors, hospitals, and just basic every day necessities that we have in southern Saskatchewan, or Canada for that matter,” said Taypotat.

But even worse than the lack of physical necessities is the fear that encompasses the locals.

“The local population also has the Taliban to worry about. If there were any groups or gangs back home that were hurting and generally terrorizing people then we have local police to look after those types of problems. They do have Afghani police here but their system is still a work in progress and not up to par as the RCMP system,” said Taypotat.

“Right now it is tough to say what the long term impact will be on the Afghan people.  Aside from all the humanitarian work that has been done by the coalition forces, the Taliban are still hidden amongst the local population.  I think that is mostly because of fear of retribution should the locals “rat” out the bad guys,” said Taypotat. “They are making great headway over here in those regards, but it is still a ways away from being perfect.”

Taypotat feels that this posting is a climax to his military career. He set a goal to learn from his experiences and eventually return to his First Nation to continue his teaching career. He wants to incorporate his Afghanistan experiences into his lessons while teaching his First Nation brothers and sisters that what Canada  has is a better than we sometimes think.