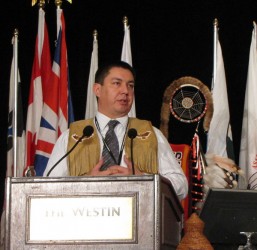 A recent court appearance has shone some unfavorable light on a prominent First Nations chief in Saskatchewan.
Federation of Saskatchewan Indian Nations (FSIN) Chief Guy Lonechild appeared in court in Jan. pleading guilty to a charge of drunk driving.

He was stopped by police in Saskatoon on Sept. 3, 2009, shortly before he was elected head chief of Saskatchewan’s leading organization.

At the time, he was charged with failing to immediately pull over for police at a check-stop on Spadina Crescent near Parktown Hotel as he continued to drive east on the University Bridge, according to a CBC news report. Police caught up to him on College Drive after which he was also charged for refusing a breathalyzer.

“I was returning home after a game of golf and drinks with friends and the Saskatoon Police Service pulled me over. At the time I was arrested and charged,” Chief Lonechild said in a Feb. 1 statement to media.

He added that the situation is a completely private circumstance and is in no way associated with his work for the FSIN, in which he strives to advance the rights and interests of the First Nations across the province.
“I want to acknowledge that I have made a serious mistake, and I apologize to everyone, especially my family, my colleagues and the First Nations people of Saskatchewan,” he said.

Prior to Chief Lonechild’s success in the FSIN election on Oct. 29, he fully disclosed the charge to the FSIN Credentials Committee and they determined his candidacy was still legally valid.

There was the question of whether Chief Lonechild could remain in the leadership role while facing a charge, however, Legal counsel and the Clerk of the Legislative Assembly have reviewed the matter and considering his a minor, rather than an indictable offence, he can stay on as chief.

“(They) have confirmed that I remain in full compliance with all FSIN legislation and the laws of Saskatchewan,” Chief Lonechild pointed out in his statement.

“Most importantly, I remain in full compliance with the FSIN Executive Act,” he added.

Chief Lonechild will be sentenced for the offence on March 23 in Rosthern court.

He faces a minimum fine of $1000, a victim surcharge, or may have his drivers license suspended for at least one year.

Fond Du Lac First Nation Chief Napoleon Mercredi faced a similar charge last year after he refused to provide a breath sample upon being stopped by police beside Findlater. Chief Mercredi was sentenced in January, after which he lost his drivers license for one year and had to pay a $1200 fine.