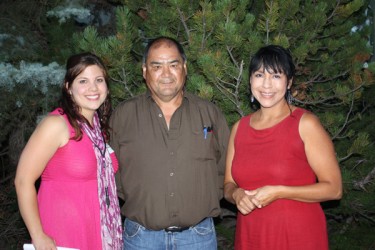 When Aboriginal artist Miles Anderson came forward with his grim story of sexual abuse at the Gordon Residential School, followed with his battle with the bottle, it didn’t take him long to understand that sharing his story was one of the best ways to heal himself and help others.

That’s why the television documentary Red Road Forward appealed to him in many ways — he was happy to tell his story again for producers because he knew how many other Aboriginal adults were children when they were molested at the now-infamous residential school system in Canada.

Not only did the documentary, produced by CBC journalists in Regina, reach a national audience, but Anderson also knew that coming forward helped save his life.

“I was walking around handing out $50 bills to people I didn’t even know,” Miles said in the documentary, which received a special screening at the Royal Saskatchewan Museum in Regina on July 30.

Among the struggles Anderson faced were those associated with the payouts from the federal government to former residential students. Without advice on how to handle finances or counselling for his childhood abuse and alcoholism as an adult, he nearly went off the deep-end after receiving a big cheque from Ottawa. Thankfully, he found help for the long-list of personal issues associated with his time at the Gordon Residential School.

“I almost went the wrong route ... if I didn’t go that route, I would have ended up just like my nephew. He ended up dying of an overdose of needle drugs,” Anderson said in an interview for Sage.

Red Road Forward began as an idea for a radio report, and then morphed into a television series before it became the hour-long documentary that is now being made available for community groups and others interested in learning from the residential school struggles. It recently aired on the CBC’s main network.

The program features interviews with five former students from the Gordon school. It begins with the horrifying details of abuse before it explains the Truth and Reconciliation Commission, the apology from Canadian Prime Minister Stephen Harper, and the money that many of the former students have received. It’s the money that has become a turning point for many — some people found themselves suddenly wealthy and unable to keep themselves from fuelling their addictions with fatal results.

The program ends with stories of healing and an explanation of how many men and women have managed to put their lives into perspective and now enjoy a life without alcohol and drugs. However, the program makes it clear not all attempts by former students at counselling and sobriety have been successful.

Current affairs producer Brett Bradshaw said it was the perfect time to address the issues because it had been two years since the Truth and Reconciliation Commission. Gordon First Nations was the ideal location to search for interview subjects because it’s nearby, and because its school was among the most notorious in the country, she said.

After spending time on the First Nation, Bradshaw found that people like Anderson were not only willing to participate, but also able to provide details of abuse as well as their stories of recovery.

“We learned about all the complications that come with living with the memories of abuse, and then dealing alcoholism. We learned that a lot of them had new issues, like being intimate and some people wound up hurting other people, people they cared the most about,” said Bradshaw, who grew up in Dysart, Sask.

Anderson, who was able to see an early screening of the program, said he was proud to contribute and was delighted with the result.

“I was quite impressed with it,” he said. “It’s something I find very positive because by talking about it, it might get other people to come forward and talk about it.”

He said that even today there are many people who he remembers as young students and fellow abuse victims who refuse to come forward to authorities with their stories, even when they could, in many cases, receive tens of thousands of dollars in compensation money.
“There are still so many people who won’t come forward. They will not speak about it,” he said. “I know people who attended the school alongside with me. But even with the payout, they won’t bother to come forward. They think it’s like opening old wounds. They feel that no amount of money is going to change what happened. They just want to forget about it and get on with life,” Anderson added.

Few know of the risk of giving a large amount of money to someone with severe addictions more than Anderson. After his cousin, Daniel Pratt, received $100,000, his drug abuse escalated until he succumbed to an overdose about five years ago. Unlike Anderson, his cousin didn’t accept the counselling others were able to receive.

“Some people used their money wisely, some people really didn’t have a clue and it sent them off the deep end,” said Anderson, who was among the first residential school victims to come forward in the early 1990s and among the first to receive compensation. “Daniel was my best friend. Everything that happened to me, happened to him.”

Anderson said the head of the school often took him and his cousin to the United States where he would molest them. “He would take us to the States in his car.… He would take us to his hotel room while the other kids were doing something else,” he said.

“Call us weak, scared, intimated, whatever you want. We were taught in this cycle by the top boss in the school ... Everybody knew about it but people were too scared to say anything.

One of the final humiliations was learning that his abuser wound up serving just under four years for abusing many children.

“That was just ridiculous. You see people today one person getting charged with just one victim and they get seven years,” he said.

Those wanting to watch the documentary ‘Red Road Forward’ can see it online at www.cbc.ca/video/#/News/Canada/Saskatchewan/Red_Road_Forward