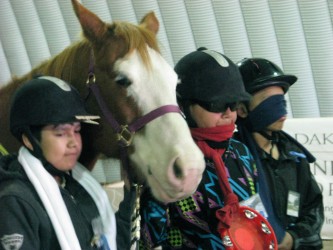 What’s unique about the Inspire Direction Equine Assisted Learning program is that it targets everybody, not just teens or people in trouble.

“Kids were randomly chosen through the school so it was a good sample of the population. The approach that was taken, which is really unique from any other program out there, it’s pro-activeness. Helping everyone in the community to be strong leaders, have positive life skills,” said Koralie Gaudry, program director. “It’s all about building community capacity.”

IDEAL finished its inaugural four-month run — or trot, which may be more appropriate — in May with 90 participants. The course included one hour each week for 16 weeks in the newly built One Arrow Equestrian Centre, which is an indoors heated facility with stable, mezzanine and classroom. The students broke into pairs to work with the horses. There were nine groups of 10 students, ranging in age from eight years to adults in their forties. This year, 12 horses were used for the program. Six other horses are in training and almost ready for the experience.

“We have to make sure that (the horses) are really safe, that we really trust them, that they’ll bring out the teachable moments with the students. They have to be able to handle the energy from the students and the energy they put out themselves,” said Gaudry. She noted that the horses are in-tune with their handlers and will respond to the mood of the participants.

With the aid of a community liaison who worked with the students and teachers, students took what they learned in the stable — teambuilding, working with another person, negotiation — into the classroom at both the Almightyvoice Education Centre and Carleton Trail adult education centre, and discussed with their classmates how they could incorporate these new tools into their lives.

Gaudry has seen an “incredible transformation” from the time participants first started with the program to now. The students have more confidence and more compassion. She said teachers commented there was less bullying in the hallways because IDEAL participants stand up. Gaudry has also heard positive comments from parents, who have seen changes at home as well.

This summer the program was adapted to run as three-day per week day camps with 225 participants expected. The time will be split between equine-assisted learning and embracing a cultural component through interaction with Elders.

In the fall, IDEAL will begin its second run with the 16-week program, but will include another new component. It will be adapted and offered to families as well as youth in the justice system.

“We’re offering different types of programming that will benefit all community members and that really is what makes it unique from any other equine program across the country,” said Gaudry.

IDEAL is being carried out in research partnership with Brandon University as a means to resolve some of the issues that plague the One Arrow First Nation such as high drop out rates, difficulties at home and at school, high incarceration rate, high victimization rate, risky behaviours, and high rates or attempts at suicide. In Cree culture, the horse is a powerful spiritual entity, symbolizing strength and freedom.