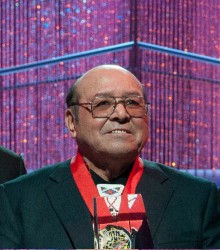 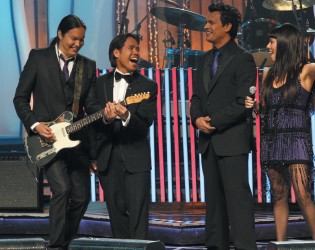 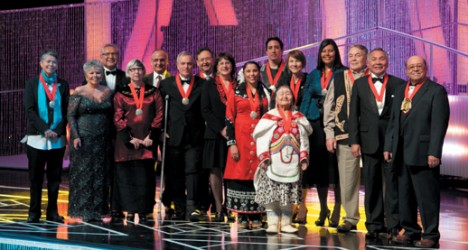 From playing hockey in bob skates, using a willow stick and frozen horse manure for a puck, Fred Sasakamoose went on to become the first Aboriginal player in the National Hockey League.

For this, and other accomplishments, he received a standing ovation upon receiving his National Aboriginal Achievement Award March 11 in Edmonton.

His niece, Lorraine Sasakamoose, and other family members, were cheering for him along with 2,000 other audience members in the sold out Jubilee auditorium.

In an interview before the awards, Sasakamoose was introspective about his career.

“It was my old grandfather who used to take me down to the lake when I was five, where I learned to skate. He’d clear some ice for me and then he’d fish while I glided around the rink. That old man couldn’t speak or hear, but he could see. And I often wonder if he had vision. What did he see in me? Did he know that I would become somebody?”
The next year at age six, Sasakamoose was trucked to residential school and stayed there for nine lonely years. The priests trained him intensely in their hockey program and at 14, Fred was scouted by the Moose Jaw Canucks Western Canadian Junior Hockey League manager.

“I told my mom ‘I’ve been away from you for nine years so I’m only going to this hockey camp for two weeks, then I’ll come back to you’. I got over there and I was so ashamed of myself for being an Indian – the only one in a sea of about 80 white kids. They kept being sent home but I was kept,” he said.

True to his word, Sasakamoose started walking home at the end of two weeks. He made 28 miles from Moose Jaw to his home at Ahtahkakoop First Nation before the team manager intercepted him.

“He asked me if I was hungry and then took me to eat. He promised I would make the team if I would just come back and keep playing for him.”
Sasakamoose kept training and went on to play for the Chicago Blackhawks in 1953. He used his connections with the NHL to create recreational opportunities for children across Canada and operated a hockey school. He also served on the NHL Ethnic Diversity Taskforce.

On the home front, he became chief of his band, and has remained a councilor for 35 years. At the Ahtahkakoop First Nation Cultural Camp he teaches youth to hunt, fish and trap in the traditional way, and counsels those troubled with drug and alcohol addictions.

Sasakamoose is a soft-spoken man, but the pomp and adoration he enjoyed during the awards night might not be a one-off occasion for him if a proposed film is produced about his extraordinary life.

“Filmmakers in Winnipeg and Toronto have approached me for my story and we’re still in negotiations about it,” he said.

Sasakamoose joined 13 other recipients at the Achievement Awards ceremony, hosted by Adam Beach and Evan Adams, who reprised their roles as Victor and Thomas from the movie Smoke Signals, to the delight of the audience.

“I sat in the top balcony with lots of high school students and I loved their youthful energy, hearing their positive commentary and their cute comments whenever Adam Beach said something,” said Shalene Jobin, of Edmonton.
“I really appreciated the push to get so many young people there,” she added.

The first presentation of the night went to Ontario’s Teyotsihstokwáthe Dakota Brant, who won the Special Youth Award. The 23-year-old from the Mohawk Nation Turtle Clan, of the Six Nations of Grand River, is the 2010 Miss Indian World. Her Mohawk name means “One Who Causes the Stars To Be Bright”.

“These awards are the highest national honour Aboriginal people bestow on our own,” said Roberta Jamieson, President and CEO of the National Aboriginal Achievement Foundation. “They are also a tremendous source of motivation and inspiration to our youth to reach their dreams…we know Canada will be enriched as a result.”