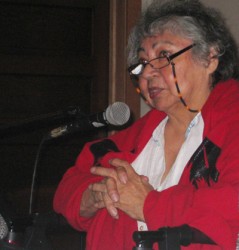 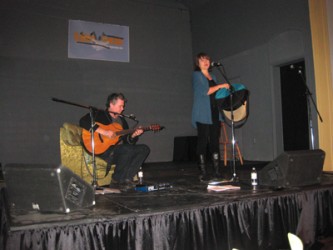 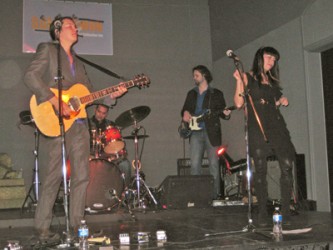 The oral history, culture, and traditions of Aboriginal people were celebrated at the tenth annual Sakewewak storytelling festival in Regina.

“We believe that oral traditions are the foundations for a lot of contemporary artists,” said Elwood Jimmy, director of Sakewewak, an Indigenous artists’ collective in Regina.
The festival, which ran from Feb. 23 - 27, showcased traditional and contemporary storytellers, musicians, and dancers from across Canada, including Shirley Ida Williams from Wikwemikong Unceded Indian Reserve on Manitoulan Island in Ontario.

Williams, who is both an Odawa and Anishnaabe language speaker, spoke of preserving Indigenous languages so that stories can continue to be shared.
“We were forbidden to tell our stories for over 150 years,” she said. “Our stories tell about our history and our language and culture. Language expresses our ideas of the world and how we see it.”

Williams is an elder and professor emeritus at Trent University. She teaches language courses at Lakehead University and she has also published a collection of books in Odawa, Ojibway, and English.

Williams work to preserve language started when her community was witnessing a high suicide rate amongst its young people.

“There are so many lost souls in this world because they don’t have their language and culture. I’d like to at least give them that chance. If I know it I can teach it and restore some of their pride, and identity and foundation of self worth.”

Because of the residential school system, many people in her community lost their language and their culture, she said.

“They were taken away from their families at the age of five and of course you are going to forget it. They didn’t want to be punished so they made a choice to lose the language. That’s why it’s so important to revitalize it,” said Williams.

Williams said she hoped many at the festival could learn from her teachings.

“I share my stories whole heartedly one hundred per cent. Hopefully people will take home what they learned and use it in their everyday lives.”

Cecil King, former dean of the First Nation University of Canada’s Saskatoon campus, Allan Adam who has written a book in Dene for language teachers, and teacher Randy Morin also shared stories at Sakewewak about preserving culture, pride, and identity in Aboriginal communities.

Jimmy said each year the festival takes on a different flavour as they feature different storytelling arts such as multi-media or visual arts. At this year’s festival, music played a significant role.

Cheryl L’Hirondelle, a Métis singer and performance artist featured her Songland series at the festival.

The series was inspired by stories from Vancouver’s downtown east side. L’Hirondelle wrote lyrics about some of the people she met and she would often sing for them on the streets.

Also at the festival, L’Hirondelle took people on a bus tour of Regina. She encouraged people to share stories and songs about different locations in the city.

L’Hirondelle shared that she felt privileged to participate in the festival.

“For me, the people that I come from, the road allowance people, the disenfranchised people, there is history of being shut out and silenced. So I just get really excited when I get to be invited,” she said.

“I think the storytelling is pretty natural because Digging Roots comes from an oral culture and in an oral culture you tell stories to get your point across,” Kanatakta said. “I grew up around a lot of elders in my community and was told to pay attention to them and listen to them and their stories.”

Kanatakta added that his music is meant to inspire and empower as are many of the songs speaking about Indigenous rights, reclaiming culture, and believing in peace.

“I do say things that politicians can’t say but we do it out of love,” he said. “We’re not an angry Indigenous group. We’re empowered.”

Jimmy said Sakewewak is an important event that can bring the whole community together.

“The demographics are shifting and there’s such a huge Aboriginal population here. I think it’s really important to try and build those bridges between Aboriginal and non-Aboriginal communities and I think that this festival is a really accessible and entertaining way to do that,” he said.

The festival wrapped up with a contemporary twist on traditional hoop dancing. The performance featured Terrence Littletent and Chanz Perry hoop dancing and sharing stories to hip-hop music.

Top: Shirley Ida Williams from Wikwemikong Unceded Indian Reserve in Ontario, spoke of preserving Indigenous languages so that stories can continue to be shared.