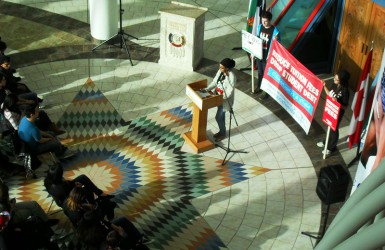 Two hundred strong marched on Feb. 1 from the University of Regina to the First Nations University of Canada to protest the cost of higher education and insufficient government funding. At the core of the march was the federal government’s two per cent cap on the Post-Secondary Student Support Program, which funds Aboriginal students.

“It’s really important that the federal government knows we stand in solidarity,” said Alanna Makinson, Prairies organizer for the Canadian Federation of Students. The CFS organized marches right across the country as a National Day of Action.

Solidarity was clear as university students were joined by members of the community and as the Federation of Saskatchewan Indian Nations endorsed the march.

“Having the support of the FSIN was incredibly powerful,” said Makinson. “We, as students, as community activists, as First Nations, we need to work together in order to get anything accomplished.”

In a news release issued the day of the march, FSIN Vice Chief Simon Bird said, “Last week the Prime Minister spoke about unlocking ‘the enormous amount of economic potential of First Nations peoples’ during his address at the Crown-First Nations gathering. In order to achieve this potential, the two per cent cap must not only be removed, but funding for First Nations education must be increased.”

According to the FSIN, insufficient funding through the PSSSP has resulted in 10,000 First Nations students across the country being denied access to post-secondary education. If the cap were to be lifted and all eligible students funded, an additional $250 million annually would be required.

Makinson also noted that the rally was to bring attention to the overall need for more federal funding for post-secondary institutions so tuition fees could be reduced and more grants made available for students.
“The government needs to prioritize funding for our universities and college system adequately,” she said.  “Access to education is the key to Canada’s future and we need to make it a federal priority.”

Makinson was pleased with the number of people who took to the streets.

Makinson said the CFS will continue to work with the federal government to achieve its goals. Meetings are ongoing “on many different levels to communicate what students need in order to improve access to university and college education. But it was also very important to show the federal government in a very public way that students want these things as well as the community.”