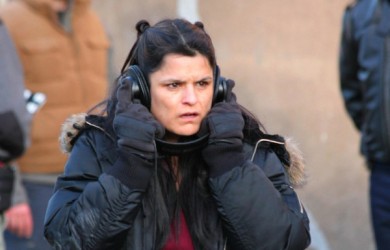 When Georgina Lightning was growing up on the Samson First Nation, the house in which she lived was merely a two-room shack. Today, the Cree filmmaker’s name can be used synonymously with the more opulent White House. Or, more specifically, the White House Project’s EPIC Emerging Artist Award, which Lightning won in April on the strength of her 2006 full-length motion picture, Older Than America. It was the first time the award was presented. “It was great,” said Lightning about winning the title. “I was surprised that I was the first woman ever, anywhere in the world, to win that. That was exciting.” Accepting the award at a gala in New York’s palatial IAC Building, in front of a packed house that included celebrities such as Meryl Streep, Lightning was more intent on sharing her victory with her children and the cast and crew of her movie than being distracted by the star power. “I wanted to thank everybody and say it was really wonderful to see where my journey has led me: (to) this big room with the most powerful women in the world,” said Lightning. “I was blessed to be among the calibre of people present and have my three kids there to see this.” Ever since the film’s Canadian premiere at the Dreamspeakers International Aboriginal Film & Television Festival in Edmonton in 2008, Lightning has been on a whirlwind tour with Older Than America, which has so far screened to full houses in roughly 60 communities in North America. Lightning relentlessly promoted the film herself, although the intense subject matter of the project created a massive word-of-mouth buzz. The drama tackles the issue of abuse of more than 100,000 Aboriginals, who were taken from their parents and shipped off to boarding schools in the US as early as 1869 under President Ulysses S. Grant’s “Peace Policy.” Although the forced enrolment plan was abandoned decades later, rampant accounts of abuse in Native schools resonated throughout the 1980s. Canada adopted a similar residential school system in the 1880s and continued the practice for nearly a century. A 2001 report released by the Truth Commission into Genocide in Canada indicated that 50,000 Aboriginals died in the process. The subject compelled Lightning, whose father was a victim of the residential school system, to create a drama about the issue. Lightning wrote, directed and even starred in the film. Rounding out the cast were Tantoo Cardinal, Adam Beach, Bradley Cooper, and Wes Studi. While the award, created by a non-partisan foundation designed to help elevate women into leadership positions, has nothing to do with the current residents of the White House, Lightning has aspirations that President Obama will eventually view the film. “If he sees it, I would hope that he would say, ‘Wow that was a powerful film and I really think it’s time to support the healing effort of the survivors of the boarding school situation,’” said Lightning, who’s back in Edmonton to work on a documentary about the Canadian residential school system. “We have to acknowledge the fact that the boarding schools issue happened, but we have to move on. We can’t be victims anymore, we have to start healing.”