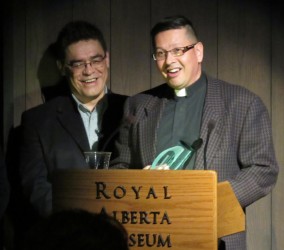 Speaking out for the voiceless has earned Aboriginal cleric Rev. Travis Enright an Interfaith Advocate Award from the Edmonton Interfaith Centre for Education and Action.

“It’s about the work of my ancestors,” said Enright of the award. Much of his work deals with advocating for the homeless and presenting the complexities of being in residential schools to interfaith and Christian groups. Enright’s mother, and many others in his family, went to residential schools and he says that he is “giving voice” by showing this history to Canadians “because most people don’t realize what happened in residential schools. They don’t see how one set of decisions has caused a series of catastrophic events on one segment of the population.”

Enright is an Anglican priest. He was the vicar at All Saints’ Anglican Cathedral in Edmonton and is currently the rector at St. Faith’s. He credits his grandmother, mother, and a number of pastors and priests in the Christian church as major influences for showing him “what it means to be a compassionate person, that you can tell a story of resilience even in the midst of horrific situations.”

Enright was chosen for the award by the Interfaith Centre’s Board of Directors based upon suggestions from the executive or concert committee.

“Generally, the discussion involves what we have seen and/or experienced over the past year at our events and other events in the Edmonton area that would be good examples of someone who dedicates quality time and energy to interfaith work. This has taken many forms and we are open to a variety of initiatives,” said board member Pat Holt.

“One of the events that highlighted Travis for our committee was the presentation done at City Hall for the Week of Christian Unity in January of 2014, when the emphasis was on the Canadian church,” said Holt. “Travis developed a fabulous program that highlighted Aboriginal Christian spirituality. Personally, I loved the display and the refreshments that day – featuring ‘bannock and berries’ as a new image of ‘bread and wine.’”

Working with marginalized populations is another important aspect of Enright’s work.

“There is a man I visited today in the hospital. In a different time and world this man would be an incredible leader because of how he enforced the codes on the street. But now people only see him as dying from AIDS and drugs and the rigour of being on the street,” he said.

“Every time I go to talk to these lost souls, there is hope. We can touch each other in a profound way when our souls are open to the possibility of the Creator. Man does not have the last word.”

Enright is the father to a daughter he adopted whose birth mother was in difficult circumstances.

“We’re all responsible for our children,” he said. “We can’t look away to say, ‘this is not my child.’ In our culture all children are our children and we capture that moment of understanding.”

Photo Caption: Rev. Travis Enright (right) accepts the Interfaith Advocate Award presented to him by Lewis Cardinal during during the Interfaith Centre’s annual multi-faith concert on Feb. 8 at the Royal Alberta Museum.