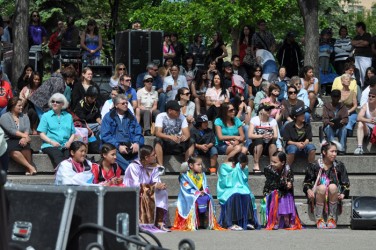 Aboriginal people will be involved in all three time frames of Calgary’s bid for Cultural Capital 2012: exploring the historical past and western heritage, cultural expression in the present, and looking forward to creating the future. The overarching theme of Calgary 2012 is to celebrate, connect and create.

“Calgary 2012 presents a huge opportunity for Aboriginal Calgarians to participate on many levels,” said Lorna Crowshoe, issue specialist with the city’s social planning and policy.

Crowshoe was part of the advisory group that brought 100 Calgarians together in a spirit of inclusion to share ideas and to inform the working committee’s application to Canadian Heritage.

“Many Aboriginal Calgarians feel they are invisible, not participating at a level which they would like to be or ought to be, a loss for the city in general,” said Crowshoe. “Calgary was built within First Nations territory on a rich landscape full of historical culture that nobody talks about. With this visibility there also needs to be a voice that arts and culture provides a phenomenal way to build relationships and incorporate First Nations presence.”

The centennial of the Calgary Stampede is one of the catalysts for the bid.

“The stampede is one of this city’s huge organizations that has never lost sight of the First Nations people and they are always included in the annual planning,” said Crowshoe.

Every year the stampede has honoured the Aboriginal people, showcasing art and traditions at Indian Village. This is a celebration Crowshoe would like to see built into the cultural fabric of the city and incorporated through a variety of other organizations.

Crowshoe identified three valuable projects in progress that could be part of what goes forward in 2012.

Firstly, the Solar Decathlon project with the University of Calgary, not only fills a need in the Aboriginal community but also provides a different way to model First Nations housing.

Secondly, the development of a video about Aboriginal inclusion, in partnership with the Glenbow Museum, the University of Calgary and All Nations Theatre, is set to launch in 2012. In this unique project, the entire community takes ownership, designing the video which will be developed with Insight Share, an outlet from the UK.

The third project is a concerted effort to make the celebration of Aboriginal Awareness Week a mainstay of Calgary’s summer festivals. The revamped celebration begins on June 21 with a gala featuring Buffy Sainte-Marie. The celebration will also include a family day on June 25 at Shaw Millennium Park, showcasing Aboriginal art, dance, crafts, culture and traditions. In order to create voice, the community working toward this event decided its slogan was “to go big or go home.” The aim is to get younger people involved.

“These connections are vital… providing a cultural and historical lifeline critical to sustain future generations of Aboriginal children,” said Crowshoe.

“The conversations need to include talk about the inclusion of Aboriginal people in mainstream culture for it is ancestral history that helps to shape Calgary’s unique identity,” she said. “This will open up a space where Aboriginal participation will be valued.”