Alberta in solidarity with Elsipogtog and Mi’kmaq 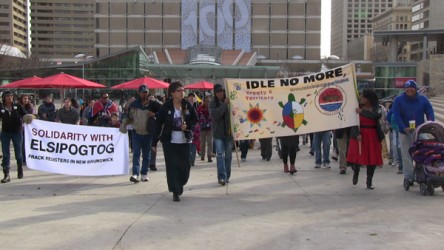 The land rights battle of Elsipogtog can be felt right here in Alberta.

“Like our Mi’kmaq brothers and sisters out east, our nations and the nations in northeastern Alberta are facing annihilation of their traditional territory and homelands to industrial development,” said activist Eriel Tchekwie Deranger, a member of the Athabasca Chipewyan First Nation. “What happened out east is a representation of the inequality our people face, not just out east but across Canada and across Turtle Island.”

Deranger was among the 300 people who marched in Edmonton on Oct. 18 from Churchill Square to RCMP K Division Headquarters. Representatives from the RCMP greeted the peaceful protesters and presented tobacco to the event’s leaders. It was accepted.

“I’m here and you’re here to tell this government that our treaties are treaties in the spirit of friendship and peace,” said rally organizer Freda Ballantyne.

Elsipogtog, located outside of Rexton, New Brunswick, had been protesting fracking and shale gas development within their territories undertaken by the energy company SWN Resources. The protests had been going for around three weeks, when on Oct. 17, the RCMP moved in to enforce an injunction, despite the efforts of Elsipogtog Chief and Council to resolve the issue peacefully. The confrontations escalated into violence, with the RCMP using fire hoses, pepper spray, tear gas, rubber bullets, and dogs to try to disperse the group. Snipers were also sent in.
Reports indicate that some protestors responded by torching cars and throwing Molotov cocktails, leading to numerous arrests.
Photos and videos from Elsipogtog quickly went viral on social media, inspiring around 50 solidarity rallies throughout Canada on Oct.18. Several rallies were held in Alberta, including a gathering in Fort McMurray, outside of the RCMP station.

“Having our [Treaty 8] communities traditional territory in one of the most heavily resource developed areas in Canada, we know the outrage and frustration that the Elsipogtog Nation is experiencing, in fact, I am sure every First Nation community across Canada has an idea of that same frustration. Canada can no longer unilaterally cast aside our Aboriginal Title, Rights and Treaty Rights,” said Chief Trevor Mercredi, the Livelihood Portfolio Chief of Treaty 8 First Nations of Alberta.

Support for Elsipogog to protect their land and water rights and denouncing violence came from First Nations organizations across Canada.

“The Elsipogtog First Nation was raising legitimate concerns about the environmental impacts of shale gas fracking which could have serious and negative impacts on its traditional territory and the health of its citizens. The environmental issues associated with shale gas fracking are far from clear. To raise concerns and to insist on an appropriate forum for airing these concerns is the proper things to do in a democratic society.
Instead, the Elsipogtog First Nation was met with pepper spray, rubber bullets and arrest,” said Grand Council of the Crees (Eeyou Istchee) in a media release.

“This is a sad example government and industry moving in to extract resources at any cost while casting aside and ignoring Aboriginal Title and Rights,” said Robert Phillips, of the First Nations Summit political executive.