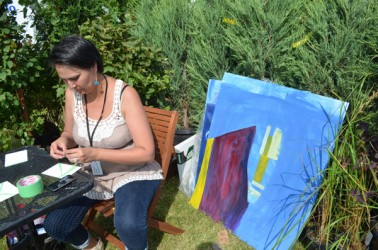 It is the hope of the Monto installation organizers that the list-minute addition to the three-day Edmonton Folk Festival in early August will result in dialogue.

“There needs to be some difficult conversations and openness created,” said Dawn Marie Marchand, one of the Monto organizers. “During the Folk Festival, the different worldview was apparent. One lady told me that our people just need to ‘get over residential school and move on’.”

The idea for the installation came about at a Wicihtowin Art and Culture Action Circle meeting Marchand attended.

“Lewis Cardinal asked me to pray about it. So I did and I had this unbelievably insane, over the top, way not enough time or resources idea to hang artwork from the Elders, the youngers, and the grassroots artists from trees. I was told to write it down and I did. The next few weeks were an insane blur of art workshops and finalizing all the little details.”

Monto consisted of art which explored various facets of Aboriginal culture, featuring original work by established and emerging Aboriginal artists. The art was displayed on cedars, which anchored the installation in every corner, and adorned with ribbons featuring Cree colours. Set up as a short labyrinth, the audience walked through the exhibit and saw the progression of art from younger voices to Elders. Monto also included a section of kitsch, like dollar store dreamcatchers and other items from popular culture, commonly associated with First Nations by the rest of society.

“I honestly believe that sometimes people do not know better because the right conversation has not happened. So, the conversation I wanted to start was technically not an easy one. I wanted to pull the general public into an experience that contradicts the pitfalls of ‘romanticism, demonization, and pan-indianism.’ I wanted them to have that jarring experience of following their own ideas of who we are that, quite frankly, do not accurately reflect our nations, our treaties, or our Indigenous knowledge and contrast that with the experience of following us to where we need to be to move forward in mutual respect and understanding,” said Marchand, a Cree and Métis contemporary mixed media artist who attended the Boreal Forest Institute for the Indigenous Arts in Fort McMurray.

“I am hopeful that more public spaces open up, and that when opportunities for the dialogue on public art spaces happen we take advantage of them,” she said. “I think the conversations need to change just like in your relationships. You don’t have the same conversation every time so if it goes up again I personally would go back into the community to find new stories and artists to bring to the conversation and change it every time for every venue.”

While Monto may appear to be taken from name Edmonton, Marchand says the meaning goes deeper.