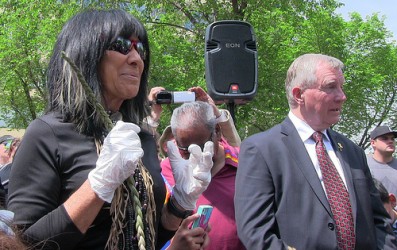 Buffy Sainte-Marie lives the definition of a creative life. She is best known as a singer/songwriter and performer, but is also a multi-media artist and Aboriginal educator. Sainte-Marie was in Edmonton for the Dreamspeakers Film Festival where she was inducted into the Walk of Honour on May 31 and performed at the closing gala on June 1.

With a career that spans more than 40 years, Sainte-Marie’s audience is as diverse as her work. Some first remember her from the children’s television program Sesame Street. Others became aware of her work through the song “Universal Soldier” which remains an anthem in the peace movement, or “Until It’s Time for You to Go,” a love song covered by a multitude of artists. Yet others know her from receiving an Academy Award for the song “Up Where We Belong,” and more recently through her work in Aboriginal education.

“It’s really nice to have been able to connect with a lot of generations for different reasons because I am very diverse and like to do a lot of different things,” she said.

Sainte-Marie, who is Cree of Canadian and American background, has recorded 17 music albums, scored movies, raised a son, earned a Ph.D. in Fine Arts, and received numerous awards. Her latest album is Running for the Drum.

She is especially enthusiastic about her Cradleboard Teaching Project, which is “a model of delivering Aboriginal education to everyone in a way that people can understand. I’m not talking about beads and feathers; I’m talking about science through Aboriginal eyes and bringing real, genuine Aboriginal curriculum into the universities,” she explained.

Sainte-Marie is a strong advocate for Aboriginal education and culture. When cast in The Virginian, a made for television movie in the ‘60s, she insisted that all of the Native parts be played by Aboriginal people. After she was told this would be impossible, she joined forces with the late Jay Silverheels (famous as Tonto in the Lone Ranger series) to make it happen.

“That was the first film that, because of that insistence, had all of the Native roles played by Aboriginal people,” she said.

She has witnessed the opportunities grow for Aboriginals in entertainment, after much hard work.

“These days, everybody knows about the Aboriginal Music of Canada Juno category, but in order to have that category there had to be years’ worth of professionals working the music industry,” Sainte-Marie said. “But now we really feel a huge, huge impact by Aboriginal people in all different styles of music and it such a good thing to see.”

Songs like “Universal Soldier,” “Bury My Heart at Wounded Knee,” and others dealing with peace, Aboriginal issues, the environment, and other aspects of social justice, are mainstays of Sainte-Marie’s musical catalogue. Her activism resonates strongly in her lyrics, and it is no surprise that she is excited about the Idle No More movement.

“To me, Idle No More is like it was in the ‘60s,” she said. “In the ‘60s, all the things we accomplished weren’t done by organizations that had a big infrastructure and salaried people who tried to push their agenda. They were movements from the streets. Idle No More seems so genuine like that, whether it is the flash mobs or the details of what people actually have to say.”

As a celebrity, what Sainte-Marie has to say resonates. However, she emphasizes that everyone has to potential to effect social change.

“Because we have a stage, sometimes we can reach more people at one time but that is not to take away from people who are working in their communities every single day to make change happen. Little by little I think the human race is ripening and getting better.”