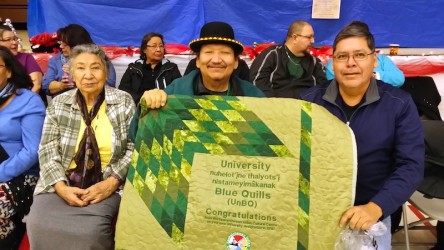 A combined Dene/Cree name is just one way the former Blue Quills College has marked its graduation to becoming a university.

As of Sept. 1, University nuhelot’įne thaiyots’į / nistameyimâkanak Blue Quills became the first Indigenous-controlled university in Canada. While the First Nations University of Canada operates in Saskatchewan, it is a federated college under the University of Regina.

Photo caption: Holding the starblanket at the round dance celebration are: (from left) Emma Gladue, a founding member of the group that took over the residential school in 1971; Vince Steinhauer, president of University nuhelot’įne thaiyots’į / nistameyimâkanak Blue Quills; and Saskatchewan Indian Cultural Centre representative Ross Gardipy. (Photo: submitted)

“Blue Quills has always been under the control of the member Nations in northeast Alberta and they wanted it to be an expression of sovereignty that we could do our own university,” said James Lamouche, director of research for UnBQ.

The board made the recommendation two years ago. Now, as a university, UnBQ will be able to access research grant funding and other dollars. It will also continue to work with its different university partners across the country, continue to co-deliver degrees, and grant its own degrees in social work and education.

“Part of the way universities are chartered is usually through provincial mandate and we’re not provincial lands, we are a reserve on our own. So we are actually incorporated under federal statute. As part of the development of the organization from its beginnings, we wanted to take the next step to become a university,” said Lamouche.

The university celebrated its new status with a round dance on Dec. 4

Although governed and owned by the seven first Nations, students do not have to be from those First Nations in order to attend.

“We have a growing number of non-Indigenous students from the area that are realizing they can complete a university degree in the area without having to travel to Edmonton or Calgary or Saskatoon,” said Lamouche.

Since 1971, Blue Quills has been advancing educational opportunities in the region by developing certificate, diploma and degree programs supported by research excellence in the areas of Indigenous knowledge and language.

Blue Quills is a founding member of the First Nations Adult and Higher Education Consortium, partnering with other Indigenous institutions and programs to advance programming and educational opportunities for adults ensuring an Indigenous learning environment and content.