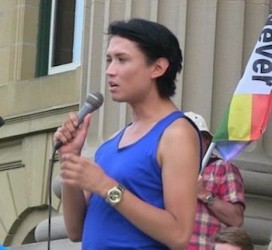 Editor’s note: We have been asked by Chevi Rabbit to use gender neutral pronouns for this story, and, to be respectful, we have done that.

Chevi Rabbit moved from hate to hope four years ago, after being attacked on the streets of Edmonton. The crime was a crime of hate. Rabbit was targeted for being gay. But instead of becoming embittered by the violence, Rabbit started an annual event, called Hate to Hope, which is now just one of many projects Rabbit is involved in, to rally support for the LGBTQ community.

“I think it was more like, world shattering… growing up in a loving home and community, I was very traumatized by it,” said Rabbit of zir experience after the assault.

(“Zir” and “ze” are gender neutral pronouns Rabbit advocates for the use of in reference to members of the LGBTQ community. They’re just one way people and organizations can be more gender inclusive in their workplace practices and in their daily lives. It’s something Rabbit talks about openly during public speeches at schools and universities.

“It put me in a shell for about a year, but I think the public speaking helped. It gave me a sense of power that a voice can make a difference,” ze said.

Rabbit, who was raised outside of the small town of Ponoka in central Alberta, is a member of the Montana Band on the Maskwacis First Nation.

Ze was born to a supportive family, and raised in the countryside, which ze admits left zir kind of sheltered, not having experienced any real discrimination until the moment of the assault.

And even though ze was constantly experimenting with gender, exhibiting non-gender-conforming behaviors even as a small child, ze’s mother was never concerned about it.

“I grew up in Ponoka, and I just always thought, ‘I want my own worldview. I want the Chevi worldview…’ I’ve known who I am for a very long time. It was always more of a question, ‘Is society going to accept me? Am I going to live in a world that will accept me?’” said Rabbit.

Rabbit was actually enrolled in Indigenous studies at the time ze was attacked in Edmonton, and was just starting to learn about many of the social issues plaguing First Nations in Canada, with the intention of helping the cause.

After experiencing zir own trauma due to the assault, and the Post-Traumatic Stress Disorder that came afterward, Rabbit’s motive shifted to helping victims experiencing similar pain. And having been through all that ze has, Rabbit is particularly focused on helping young people, because ze believes zir path would have been easier if ze had known sooner about the many options that exist for someone like zir.

“I would have had an easier life because it would have been easier to identify as a woman faster. Now I have to do costly surgery to feel more comfortable in my own skin. I looked androgynous for a long time… then, as I got older, I looked more masculine. The testosterone really set in around age 24,” said Rabbit, adding that zir’s mother would have liked to have known about options like hormone therapy—which Rabbit is on now—when Rabbit was younger, to help with the transition then.

Along with the hormone therapy, Rabbit will also be undergoing a facial feminization surgery—which involves narrowing the forehead, sexual reassignment surgery—which will change Rabbit’s sexual organs, and breast implants. All of which Rabbit says will help zir feel more comfortable in zir own skin.

When asked if the election of Donald Trump—a man known for his bigotry against both people of color and people in the LGBTQ community—made zir feel less safe with the possibility that Trump’s attitudes may unleash a backlash against the LGBTQ community? Zir answer is, no.

“Anybody who’s intelligent knows hate exists in human nature, but we don’t have to highlight it. In the USA, it’s on the surface. They’re a divided country, they need Hate to Hope,” said Rabbit, with a laugh.

“With Canada, I don’t think it’s in our social fabric DNA. We really just drilled it into each other to respect one another. I think in most of Canada (LGBTQ) is accepted, and the rest of Canada is going to have to accept it,” ze said.

As for Rabbit’s future plans, ze is planning on expanding zir reach. Rabbit recently got into work with a social housing agency, and is learning about homelessness and ways to alleviate it.

Already a top makeup artist in Alberta, Rabbit will also continue with this work. But an even bigger aspiration comes in 2017, when Rabbit will try zir hand at politics, running for city council in Edmonton, and trying to make positive change while at it.

“My mom’s side of the family is in chief and council in Maskwacis. I come from a long legacy of leaders… So I think it would be a natural progression to move into provincial politics,” ze said.

“Basically in my own way, I’m being a pioneer educating people. I don’t think a lot of people can put up with the hate… There’s a lot of hate directed at people who make change. But I’ve built a tough skin because of it,” said Rabbit.