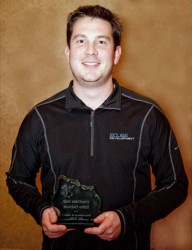 To receive recognition from Métis Nation 3 and his peers for giving back to the community means much to Matthew Kinderwater, recipient of the inaugural Humanitarian Award.
“It’s wonderful to receive. It’s one of those places that you put yourself in other people’s shoes to understand what they’re going through. It makes me feel privileged,” he said.

Working primarily with corporate clients, Kinderwater operates a data recovery business, retrieving information from hard drives, memory cards, USB keys and other storage devices. His unique company, iCube Development, is only one of two in Western Canada that work at the manufacturing level.  iCube created its own equipment to retrieve data in house, a costly venture.
Starting modestly in a residential bedroom closet in 2005, the company has grown to seven employees with two offices, one in Edmonton and one in Calgary. Having received an Entrepreneurial Leadership Award in 2005, iCube is no stranger to receiving recognition. The company has a “No data back, no charge policy.” A member of the Better Business Bureau, iCube has been nominated twice by its clients for its Business in Ethics Award.

The Humanitarian Award is about giving back to the broader community, not just the Métis community, Kinderwater said, relating the event that led to his receiving the award. When a newly married couple lost their house and its contents to fire, iCube helped to retrieve family photos and data from the hard drive of their computer. The couple thought the insurance company would cover the cost of retrieval, but when it only reimbursed the replacement of the computer, iCube generously picked up the bill.

“It was quite an honour, especially within the Métis culture,” said Fleck. “I was kind of overwhelmed. To win was just outstanding.”

In her tiny chocolate boutique in Calgary’s Beltline, Fleck is fulfilling a lifelong dream and love of chocolate with the opening of Epiphanie Chocolates in 2008. Sourcing out the finest cocoa beans and the best chocolate products, Fleck creates small batches of distinctively shaped delectable handmade treats.
“I’m kind of a Puritan,” she said. “Everything is made from scratch with all natural ingredients.”

“The award came as quite a surprise,” said Rob Joseph, who operates Wandering Buffalo Tours out of Canmore. As a driver and guide, Joseph has been taking tourists through the Rockies since 2007. He finds the job rewarding, especially meeting people from all over the world. He said, “It’s time for the Métis to do their own ventures.  There is no shame in failing, only not trying.”

Widely recognized for her role in mentoring youth, well-known recording artist, Dorothy Walker who performed at the awards celebration in 2010, received a Business Recognition Award, along with Dorothy Hourie, Custom  Clothing and Alterations and Bill Pambrun of Tribal Extreme Contracting.