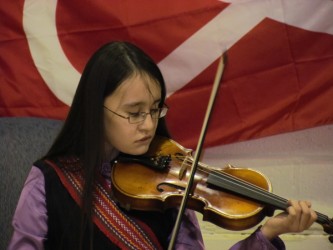 Guests at Métisfest at the Kerby Centre were entertained by Breanne Denby, who played fiddle.

Métis Fest showcases origins, history and culture
On Oct. 16, at the Kerby Centre, members of Métis Nation Region 3 presented Métisfest, a gathering to showcase Métis culture. Sponsored by the Alberta Association for Multicultural Education, the event included a demonstration of Métis crafts, dancers and a presentation by vice-president Joe Pimlott on the history and origins of the Métis Nation. Pimlott’s presentation was followed by a lively question and answer period and guests were treated to muskeg tea and bannock. Métis are often identified by their colourful handwoven red and blue woolen sashes, a strong symbol of the Métis Nation. Originating with their Irish and Scottish ancestors, Métis step dancing and jigging is a unique variation resulting from the uneven beats characteristic of Métis fiddling. Métis beadwork is also unique, characterized by geometric patterns and floral motifs for which they became known as the “flower beadwork people.” Marlene Lanz and Amy Willer from Moonstone Creations Gallery were on hand to display their beading talents.

New endowment at University of Calgary for Métis students
Métis students at the University of Calgary now have access to $60,000 in new scholarships as the result of the Métis Education Foundation’s establishment of a $750,000 endowment. The MEF began in 1991 with $60,000 and today there are endowments at nine post-secondary institutions totaling $13.5 million. The endowment creates new entrance awards, undergraduate awards for continuing students, graduate awards, and enhances existing programs run through the Native Centre to encourage the success of Aboriginal students. These programs include student advising, academic outreach and culturally specific services. The university’s First Nations Student Association Chief Gregory John said the endowment will continue to advance Métis students. “Having access to major scholarships will empower Métis students to become ambassadors for our rich culture and serve our community well into the future,” he said.

Homeless count up 12 per cent
“The rise in the number of youth and Aboriginal people who are homeless in Calgary is concerning,” said John Rook, president of the Calgary Homeless Foundation. The number of homeless Aboriginal people rose from 509 in January to 753 this past August. “We know homeless youth are more vulnerable to violence, abuse and addiction and Aboriginal people are overrepresented given they are only two per cent of the general population.” The Calgary Homeless Foundation’s August count of homeless people showed an increase of 12 per cent. From the 3,190 people that were counted in January, in August there were 3,576 people experiencing homelessness in Calgary. Rook attributes the growing number of homeless people to the increased number of workers migrating to Calgary for jobs due to the province’s strong economy. Seventeen per cent of those interviewed during the August count were newcomers, arriving within less than a one year span. While newcomers are finding work, they can’t find affordable housing. According to Rook, this year more than 30,000 newcomers arrived in Alberta.

Graphic novels rejuvenate connection to Aboriginal languages
Graphic novels, written in both English and Blackfoot, are piquing the interest of young Aboriginals. “The main focus was getting youth engaged in their traditional ancestral language in a way they’re going to be engaged and interested in,” said John Medeiros, managing editor of the Urban Aboriginal Youth Society’s New Tribe magazine. “Graphic novels were a way to get them to read from start to finish. In time, inadvertently, they’d learn some words in the Blackfoot language that might encourage them to learn more in the future.” Most recent census data reveals that the number of Native speakers of an Aboriginal language in Canada has not changed since 2006, remaining at 213,500. However, this number is a nine per cent increase since 2001, coinciding with a 20 per cent increase in the Aboriginal population in Canada between 2001 and 2006. In Alberta 3,155 residents reported their mother tongue as Stoney and 3,250 spoke Blackfoot. Unless a new batch of speakers learn Blackfoot as a second language, it could become extinct within a generation, said Indigenous languages specialist Darin Flynn, a University of Calgary assistant professor in linguistics. Flynn predicts a similar fate for many Aboriginal languages in Canada. “Second language learners are the big unknown factor when it comes to the plight of indigenous languages, and they are the main focus of local language revitalization efforts, but unfortunately they are not represented in the census, which focuses on mother tongue speakers.”