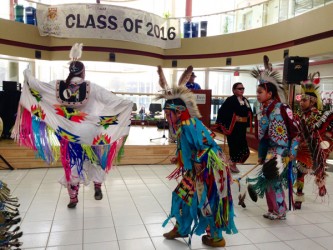 Dancing was part of the celebrations for Aboriginal Awareness Week at the University of Calgary.

The FNSA at the University of Calgary presented a week in March of on-campus activities and events that showcased Aboriginal culture, pulling together community members and students. The week included films, plays, traditional story-telling, and a traditional pipe ceremony with Ashley Prairie Chicken. Hands-on workshops included a regalia workshop, hand game demo, beading workshop, and a Métis sash bracelet making workshop. The women’s Grandmother’s Tea was held in the Red Lodge followed by an Introduction to Blackfoot Syllabics. Storytellers included Elder Valerie Crowshoe, a Blackfoot storyteller, Métis storytelling by Matt Hiltermann, and Lloyd Breaker also participated. Academic presentations by Dr. David Lertzman and Brian Seaman, Human Rights/Civil Liberties researcher rounded out the week’s events. A potluck was held to honour Carole Tucker’s work as student advisor. An Ojibway from the east, Tucker supported many students for over six years. In their Spo’pi presentation, Shawna Cunningham and Lorna Crowshoe talked about the solar house now located on campus that they helped build and design. The highlight for Lenny Calf Robe, VP Events, was the Elders coming out almost every day, bringing in more and more people from the community. “I loved everything,” said Calf Robe. On the Sunday prior, Thomas Snow took students to a sweatlodge at Mini Thni at Morley, an all-day event. He had such a good response that he plans to bring students out for the sweatlodge every month, says Calf Robe.

Suncor’s contribution of $1.7 million, announced in March, supports the Indspire Institute, a new online meeting and sharing place for educators of Indigenous students in grades K to 12. The Indspire Institute was launched at Indspire’s National Gathering for Indigenous Education. Suncor’s funding will support the institute’s programs including Nurturing Capacity: Building Community Success, a program available to communities across Canada that have challenges with student achievement. “Suncor’s leadership and support has greatly helped to make the Inspire Institute a reality. Its four-year funding commitment will not only help sustain the initiative, it encouraged other funders to lend their support as well,” said Roberta L. Jamieson, president and CEO of Indspire. Hundreds of educators were on hand for the launch. Suncor president and CEO Steve Williams said, “Building vibrant communities, healthy environments and employment prospects for future generations starts with education….We’re excited to support the Inspire Institute. It’s very inspiring to see the change being created in classrooms through innovation, creative and dedicated work by Indspire.” Suncor has partnered with Indspire for more than 14 years.

For the second year, the Aboriginal Youth Explosion will bring together the voices of Alberta Aboriginal youth to celebrate and explore their wisdom. The event is being brought to the Calgary community by Bridges Social Development. Aboriginal youth participating in Bridges’ Unveiling Youth Potential program, will showcase their work in an education program that helps youth and young adults achieve their potential through leadership in building resilient communities. In the program, youth create a story expressing who they are and their culture. Their voices are then shared in a TEDX-like performance that includes an art show. “Our stories will help others to succeed and be inspired. Sharing stories has helped me get through life and lets me know that we are all going through the same challenges but in different ways,” said Wyanne Smallboy-Wesley, from the Bighorn reserve, who recently participated in an Unveiling Youth Potential workshop.  The celebration will bring together community leaders and event organizers from First Nations throughout southern Alberta and Calgary communities on May 12.

On International Women’s Day, March 8, the Awo Taan Healing Lodge Soociety brought together women from coast to coast to reflect upon the impacts of violence against Aboriginal women and to commit to helping end it. International Women’s Day began as an acknowledgement of the struggle of all women, originally symbolizing a movement to end appalling conditions endured by women. Women and men celebrate and honour those who have struggled and worked for change, locally and globally. Awo Taan focused on the highlights and recommendations of a report on violence against Canadian Aboriginal women by the New York based Human Rights Watch group. The report came up with a series of recommendations in response to the documented patterns of police under-serving, under-protecting and in some cases abusing Indigenous women.