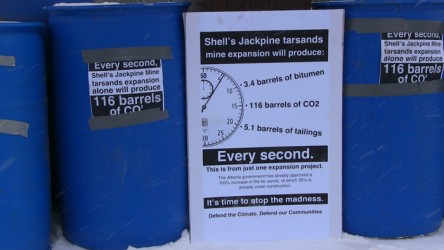 A 35-day delay in a decision by the Canadian Environmental Assessment Agency in the Jackpine mine expansion means little.

“I think it’s pretty telling how the government handles a lot of the concerns brought up by First Nations, which is this tendency to create the optics that they are addressing the concerns or needs of First Nations. We see this all the time,” said Eriel Deranger, communications officer with the Athabasca Chipewyan First Nation.

But the delay isn’t even half the time ACFN requested. The First Nation was looking for 90 days.

“We’re hoping that the extra time will allow us to assert that position that there are serious concerns and failings of an approval of this application on the government to continue to uphold and protect the rights of the First Nations and constitutionally protect the rights in Canada,” said Deranger.

She added that requests to meet with federal ministers Leona Aglukkaq (environment) and Bernard Valcourt (Aboriginal affairs) have been unsuccessful. Aglukkaq has turned down three requests while Valcourt says he is not available until the New Year. The deadline for submissions to the CEAA is Dec. 11.

Deranger says that ACFN has no new material to add to what was already presented to Alberta’s Joint Review Panel. In giving its go-ahead to Shell Canada’s Jackpine mine expansion, the JRP laid out a large number of recommendations. ACFN felt it would be beneficial to meet directly with members of the CEAA to express concerns and determine how the federal government will be treating the JRP’S 88 recommendations which are non-binding.

In July 2013, the JRP released its decision to approve the expansion, but wrote, “The panel also concludes that the project, in combination with other existing, approved, and planned projects, would likely have significant adverse cumulative environmental effects on wetlands; traditional plant potential areas; old-growth forests; wetland-reliant species at risk and migratory birds; old-growth forest-reliant species at risk and migratory birds; caribou; biodiversity; and Aboriginal traditional land use (TLU), rights, and culture. Further, there is a lack of proposed mitigation measures that have proven to be effective with respect to identified significant adverse cumulative environmental effects.”

“As much as we stand in opposition to the approval of this project, the least we want to see from the government, if they are going to give and grant the final approval, is how those final recommendations are going to be adhered to and who’s going to enforce that,” said Deranger.

She believes that the delay in CEAA’s approval may also be due to a recent report released by the federal environment commissioner condemning the government for falling behind in implementing plans for species at risk. The woodland caribou fall within this realm.

Earlier this year the ACFN lost a bid to have its fight on constitutional issues heard by the Supreme Court of Canada.

Deranger said ACFN did not see rejection by the SCC “as a total loss….First Nations are becoming more sophisticated in their abilities to put pressure on the Canadian government to be more accountable to First Nations.”

She says that ACFN is not ruling out further litigation if sufficient protective measures are not put in place to guide the Jackpine mine expansion.

Shell’s planned expansion would boost bitumen production by 100,000 barrels a day. The company currently produces 255,000 barrels a day. According to a cumulative study undertaken by Shell at the request of the JRP, the overall development across the oilsands region would result in a loss of 40 to 60 per cent of bird habitat, almost 50 per cent of woodland caribou habitat, almost 40 per cent of habitat for wood bison and important forests for lynx, wolverines, moose, beavers and black bears.