Cooking on show a howling success 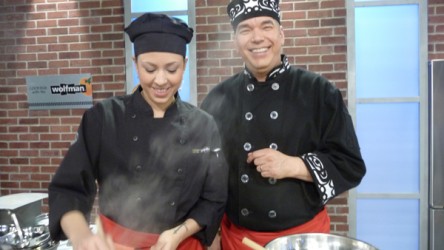 Two Alberta culinary arts students have made it through to the second round of APTN’s “Cooking with the Wolfman™” competition.

Marcella Goodrunning and Awasis Monague, both students of SAIT’s culinary arts program in Calgary, were among four Kitchen Warriors to wow the judges with their canapé skills.

Season Eight of “Cooking with the Wolfman™,” a show which has been educating viewers about Aboriginal food since 1999, has taken a dramatic new twist. Now Aboriginal culinary arts students are competing for a sous-chef position under top chef Chef James Stewart to prepare an Aboriginal feast for clientele of Toronto’s National Club.

In the early episodes of the season, Chef David Wolfman provided ingredients for eight Kitchen Warriors to prepare an Aboriginal Fusion Hors d’oeuvre dish for four. They were given four or five minutes to look at the ingredients that included a base, two proteins, accoutrements such as onions, celery, garnish, herbs, and a topping of  jam, jelly or syrup. They were then given 15-20 minutes to assemble their creation.

“What I found most challenging about the preparation was not being able to know what the main ingredient was, we weren’t allowed to know what the protein was and that made me really nervous,” said Monague.
Three judges, from a pool of 12 established professional chefs, rated the creations based on presentation, taste and texture. The aspiring chefs received direct feedback on what worked well in their dish and what could be improved in each of the three areas.

“I have always believed that knowledge is shared with you, not to keep, but to pass it on,” said Wolfman who recalls how he developed his passion for cooking at a very young age.

“I have always had a great passion for cooking food, it began with my Mom. She taught me to enjoy cooking and the results will come through your food.”

The Kitchen Warriors were chosen through an interview process. Required to be in a culinary program, they were asked questions about their first experience in a kitchen, how they felt about cooking in front of a group of people and were presented with some cooking scenarios to determine how they would approach them.

“The difference between what I learned on the show to what I have learned at SAIT would have to be performing under pressure,” said Monague, a member of the Beausoleil First Nation in Ontario.

Goodrunning, a  member of the Sunchild First Nation, said she was excited about the opportunity to do the show, to meet the chefs and the other competitors, and also to learn about the production of the show from behind the scenes.

“It puts these students under pressure to perform not only on television, but also for judgement by a panel of professional chefs which is an eye-opening experience for all of them and they deserve recognition for their efforts. This is definitely a first in the Aboriginal community,” said Wolfman.