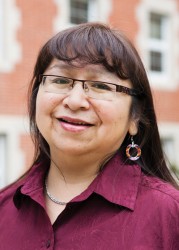 [Hello and how are you? You are all greeted by this Plains Cree woman Dorothy Thunder from Little Pine First Nation, Sask. She is very thankful to her parents for teaching her the Cree way of life.]

It was her first language as she grew up in Little Pine Reserve, near Cutknife, Sask. Despite being a fluent Cree speaker, she says, learning to read and write her language was a huge challenge. Learning Nehiyawewin – the Cree language – in university allowed her to see it from a different perspective.

In 1997, Thunder came to Edmonton to study in the university transfer program at Concordia University College. She was considering the faculty of arts when Donna Paskemin did a guest presentation in one of her Cree classes. “I was very inspired by her stories, and I thought that was something I would like to do,” she recalls.

Following her mentor, Thunder enrolled at the University of Alberta in the then-School of Native Studies and graduated with a bachelor’s degree in 2002. That was the start of a lifetime commitment, as she still spends her days on campus working as a sessional instructor and as a master’s student.

In the fall, Thunder was honoured to receive a 2012 Alumni Horizon Award from the U of A, a salute to her early career accomplishments in keeping her Native tongue alive.

“I was very humbled by the award. It is special, not only for me but for my people. I want to inspire others so they can also reach their goals. It would be wonderful to see people understand their own language. If they know who they are, then they know where they came from,” Thunder said.

“Nehiyawewin is a very complex language – a very beautiful language filled with richness. The words that are formed in Cree are a derivation of other words. For instance, the colour green – ‘ehaskihtakwâk – is derived from the word ‘askiy’ or land – which has a connection to Mother Earth. Another example, the colour blue, or ‘esîpihkwâk’ derives from the word ‘sîpiy’ for river.”

Besides her university classes in introductory, intermediate and advanced Cree, Thunder teaches high school students online through Sunchild E-Learning. She also spent six years working with Patricia Demers and Naomi McIlwraith on the English and Cree translation of a prayer book entitled The Beginning of Print Culture in Athabasca Country, which was originally written in Cree syllabics and published in 1883 by missionary Father Emile Grouard.

For her masters of science degree, Thunder is working on the compilation of a set of texts that will define the complex nuances of Cree. She would like to see other speakers and teachers use the work as a template.

Thunder, 45, lives what she learns in her everyday life. She is mother to a blended family of nine children, aged six to 23, and she wants them to understand and speak Cree.

“If you don’t have an understanding of the language,” she said, “you are missing half the teachings.”

Although she comes from Saskatchewan, Thunder has been welcomed by the communities of Hobbema and Enoch, and visits there often. “When you are facing challenges, you go back to the community, to the Elders for guidance. It was their responsibility to teach us, and now it’s our responsibility to carry it on to the next generation, so we can know what we were given from the Creator.”