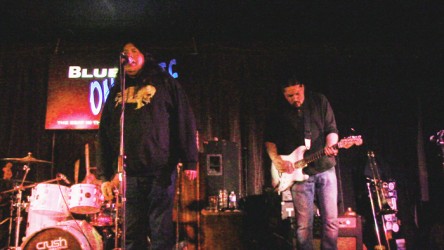 Rockin’ Randy (Daniels) belts out classic rock tunes while Rick Shott plays guitar during the jam at Blues On Whyte on Jan. 31. Both are familiar faces in Edmonton’s music scene. Daniels has led a number of open jams around the city, but is especially known for his energetic performances at Blues On Whyte.

Lauren Crazybull’s Voices of the Silenced, an audio documentary telling the stories of over 10 people whose loved ones have gone missing or murdered, was aired at the end of January at Edmonton’s Latitude 53. Crazybull’s aunt, Sandra Manyfeathers, tells her story in Voices of the Silenced. Two of her sisters and a cousin were murdered. Manyfeathers said her niece is bridging understanding between Native and non-Native people through her work. Crazybull says the rate of missing and murdered Indigenous women will negatively impact future generations. “People are growing up without their mothers and their sisters and their aunts, and seeing this violence against women perpetuated, and I think that’s really, really important to pay attention to,” she said. By creating audio documentaries on these issues, Crazybull is challenging the systemic violence against Indigenous women, adds Tracy Bear, of Montreal Lake First Nations, who is a PhD student at the University of Alberta. Her thesis focuses on how the colonial impact on Indigenous society contributes to violence against Indigenous women today.

Award-winning Métis artist Will Belcourt and Cree actor Todd Houseman are among eight recent recipients of the 2014 Cultural Diversity in the Arts grant. Belcourt, a multi-disciplinary artist, will be creating a new body of music rooted in traditional Métis folk music and writing songs taken from four generations of his family history. Houseman, a performer and Aboriginal Peoples Interpreter, will team up with Ben Gorodetsky, a first generation Russian-Canadian theatre artist, to further develop Folk Lordz, an improvised theatre show driven by Cree storytelling and Chekhovian character drama. “The City of Edmonton values diversity of artistic expression,” said Paul Moulton, executive director of the Edmonton Arts Council. “We are grateful for this wide-ranging group of writers, filmmakers, musicians, actors, performers, visual and media artists who call Edmonton home – for all that they bring to the Edmonton arts community and to the lives of Edmontonians.”

Federal Building could be named after Crowfoot

Alberta historian David W. Watts is suggesting that the newly reopened Federal Building in Edmonton be named after Crowfoot, who was Grand Chief of the Blackfoot Confederacy. “Thanks to Crowfoot,” writes Watts in an opinion piece that recently appeared in The Edmonton Journal, “Canada did not face an interracial war of the type that culminated in the Battle of the Little Bighorn in the U.S. He refused the request of Sitting Bull’s emissaries to join the Lakota in their struggle. He likewise refused to join the Métis and Cree in the Louis Riel-led Northwest Rebellion of 1885. Crowfoot’s policy of restraint made possible a peaceful settlement of the district and birth of the province of Alberta.” Watts says Crowfoot would be a good choice because he was a “multicultural in his own time,” having been born a Blood, he became a Blackfoot and united the tribes, making allies of their traditional enemies, the Cree; and was effective as a unifier for the Canadian government and the North West Mounted Police with the southern Alberta plains people. “Crowfoot can be seen as a father of two confederacies: the Blackfoot and the Canadian Confederation that Alberta joined peaceably as a result of his influence. He is as much a father of this province as of his own people,” says Watts.

Edmonton was the start of cross-country dialogue on how social groups improve lives. The Canadian Institute for Advanced Research and Alberta Centre for Child, Family and Community Research presented a national dialogue series on social innovation entitled Change Makers: Catalyzing Innovative Ideas for Social Challenges. The series brings together researchers, practitioners and community leaders to tackle the toughest social challenges and generate fresh thinking that will improve lives.  The half-day symposium on Social Identity: The Creative Power of Groups to Improve Community Well-Being, was held on Feb. 5 and brought together experts in psychology and economics to share their findings on how social identity and belonging can beat depression, protect health and nurture well-being. Participating in Edmonton were Martin Garber-Conrad, CEO of the Edmonton Community Foundation; Franco Savoia, co-chair of the Alberta Inter Agency Council on Homelessness and director of Vibrant Communities Calgary; and Allan Undheim, vice president of community building and investment at the United Way of the Alberta Capital Region. “CIFAR fellows are forging new ways of understanding how groups drive creativity and well-being,” said Rebecca Finlay, CIFAR’s vice-president of communications and knowledge outreach. “This series will connect them with community leaders to catalyze innovative ideas in improving lives.”