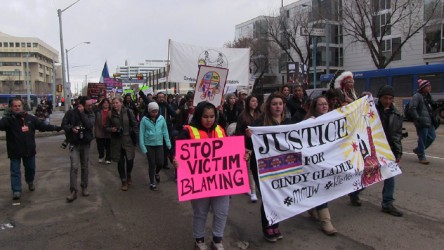 Verdict to be appealed

Alberta Crown will be appealing the not guilty verdict rendered in the case of Cindy Gladue, an Indigenous woman, mother, and sex-trade worker whose body was found in a bathtub in a motel in Edmonton four years ago. On March 18, a jury of nine men and two women acquitted long-haul truck driver Bradley Barton on a first-degree murder charge. Gladue died after she received an 11-centimetre injury to her vagina. Barton’s defence attorney claimed the wound happened during rough sex. Alberta prosecutors allege the justice made errors in instructing the jury. First Nations advocates have complained the mostly white, male jurors were not representative in dealing with a case concerning the death of an Aboriginal woman.

Acclaimed Aboriginal artist Alex Janvier has been selected to create a colourful floor mosaic for Edmonton’s new downtown arena. The $700,000 piece is the largest public art work yet commissioned in the city. The circular tile mosaic will be inset in the floor of the Rogers Place Winter Garden entrance and pedway spanning 104th Avenue. Janvier, of Cold Lake First Nation, was selected from a pre-qualified list of Canadian and international artists. Janvier said he came up with the design — inspired by the sun, sky, hills and rivers — in a day, but did about eight drafts, some of which were too complicated to be replicated in tile pieces. It will take a year to fabricate the pieces for Janvier’s work and six weeks to install it. “This new gathering place will showcase some of the best we, as First Nations, have to offer and it will show the world that while we are modern and progressive, we also remember and honour our past,” said Treaty 6 Grand Chief Bernice Martial, who is also Chief of Cold Lake First Nation.

Vandalism of the University of Alberta Native Studies tipi poles has been condemned by university officials. Between March 7 and 8, toilet paper was wrapped around the poles with vinyl flag tape. The matter was referred to both University of Alberta and Protective Services and Edmonton Police Services for investigation. “This act of disrespect targeted the culture of the Indigenous peoples and has caused Indigenous and non-Indigenous students, staff and faculty hurt, fear and discomfort,” said faculty dean Brendan Hokowhitu. “This is particularly disturbing in light of the memorial display for Murdered and Missing Aboriginal Women, Girls, and Two Spirit persons that the tipi poles supported up until Friday, March 6.”

Ambrose Place is among the five recipients of the Recognizing Outstanding Organizations and People in Housing awards recognized for excellence and dedication for creating affordable housing, ending homelessness, and bringing awareness to the issues. Ambrose Place, named after Ambrose Daniels, an Aboriginal man who died on the street of pneumonia, is a 42-unit, four-floor complex operated by Niginan Housing Ventures and serves the needs of homeless individuals and couples of Aboriginal descent. It opened its doors in February 2015. “So many individuals and groups are doing incredible work in the housing and homeless sector and this event gives us a chance to come together and celebrate achievements and milestones. Ending homelessness is truly a community-wide commitment and our award finalists and winners reflect that,” said Susan McGee, CEO, Homeward Trust Edmonton. Recipient of the Larry Shaben Award for Outstanding Leadership in the Housing Sector was Deb Cautley, with Youth Empowerment and Support Services. Other 2015 winners of the ROOPH award were Angela Rozycki, No’Ali McDaniel and Brentwood Family Housing and Terra Centre.

Photo Caption: The crowd was massive as it marched in downtown Edmonton demanding justice for Cindy Gladue. Rallies were held throughout the country on April 2.