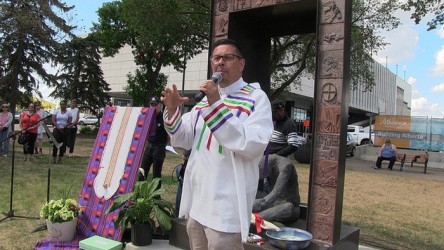 Memorial marks deaths of those without adequate shelter

Rev. Travis Enright, who is of Cree background, leads prayers and blessings at the tenth annual Edmonton Homeless Memorial on June 5. This year’s remembrance celebration honoured the lives of 47 men and women who died in the past year as a result of not having adequate shelter. The event is organized by a committee of the Edmonton Coalition on Housing and Homelessness.

Poitras recognized by U of A with honourary degree

Internationally acclaimed visual artist Jane Ash Poitras was presented with an honourary doctor of letters degree from the University of Alberta during the faculties of education and Native studies graduation June 3.  Poitras was born on the Mikisew Cree First Nation and orphaned at the age of six. She was adopted by an elderly German woman, who home-schooled her after being told by the education system that Poitras was mentally disabled. Poitras earned a bachelor of science degree in microbiology and a bachelor of arts degree in printmaking from the U of A before receiving her master’s degree in painting and sculpture from Columbia University. Poitras’ artwork, which uses layering of paint, ready-made images and text to explore issues and ideas related to the Aboriginal experience in North America, is displayed world-wide. She is the recipient of the Lieutenant Governor of Alberta Distinguished Artist Award and the National Aboriginal Achievement Award for arts and culture. Poitras was previously recognized by the U of A with an Alumni Award of Excellence.

A year of consultation by Homeward Trust Edmonton has resulted in a community strategy plan aimed at ending youth homelessness in the city. The plan provides a community-based solution that aligns provincial and local youth strategies and is supported by four core principles: the Housing First approach; stakeholder engagement; positive youth development; and, individualized and youth centred supports. These principles will help achieve the five goal outcomes set by Homeward Trust: safe, secure, stable housing, long term connections to supports, improved wellbeing, education, and employment. This combination of provincial and local alignment in a strategy to tackle youth homelessness is the first of its kind in Canada. “While we have successfully housed youth through the Housing First program, we have more that we want to accomplish,” said Susan McGee, CEO of Homeward Trust Edmonton. “The community strategy outlines a local response to addressing Edmonton’s high risk and homeless youth, and will act as a guide as we plan the youth programming for the rest of the year and beyond.”

Heart Garden: a project for reconciliation

A public art installation of hearts was set up June 21 downtown by RISE, a group of 30 socially active community members committed to supporting reconciliation in words and actions. The hearts were created, in part, through two work-bees held in the basement of the Trinity United Church. RISE (Reconciliation in Solidarity Edmonton) hopes to provide an outlet for people to discuss how to move forward as a community and have better relations with Aboriginal people, said co-founder Miranda Jimmy. The group came together over the last year since the Truth and Reconciliation national event in Edmonton in March 2014. The Heart Garden, an installation of hearts made of wood that includes words of hope and wishes for reconciliation, will be displayed for the summer in various locations.

Homeward Trust’s third annual Homeward WalkRun, presented by Yardstick, in support of the Urgent Families Initiative, was held June 13 at Louise McKinney Park. The event raised over $25,000, which will go to helping local homeless families find safe, secure, and permanent housing. “Since the start of the Initiative on Dec. 1, we have engaged over 100 families that are experiencing homelessness, and teams are working diligently to house them all,” said Susan McGee, CEO of Homeward Trust Edmonton.  Over 150 people of all ages participated in either an eight-kilometre run or five-kilometre run or walk, followed by a one kilometre kids’ fun run.

A revitalization plan for the Quarters Downtown includes giving the name of Kinistin‚w Park to a planned green space along 96 street or the Armature between 102A and 103A avenues. The name means “us three” in Plains Cree and echoes the historical name of 96 street, which was Kinistino Avenue. At one and a half city blocks wide, Kinistin‚w Park will connect to Louise McKinney Park and the river valley. Construction is expected to start in 2017, with design plans wrapping up next year.

Indigenous understanding of home and community was one of the themes presented at the Right to Housing conference held June 5-6. Russell Auger, who is a service provider in the inner city, spoke on the topic. It was important to examine that aspect of homelessness, said conference organizer Jim Gurnett, as Aboriginal people are over-represented in the homeless population. Headlining the event was Michael Shapcott, one of Canada’s leading housing policy experts and advocates. Jay Freeman, the City of Edmonton’s executive director of housing and homelessness, presented a session looking at how Edmonton’s activity around housing has ebbed and flowed over recent decades. Other conference sessions featured presentations on a range of the challenges to housing security such as youth homelessness and NIMBYism, and some of the success stories, including Ambrose Place and McCauley Apartment.†The conference was presented by Edmonton Coalition on Housing and Homelessness, an organization involved in housing education and advocacy for nearly 30 years.