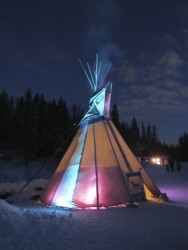 A teepee glows in the darkness of the Mill Creek Ravine during the Flying Canoe Adventure. The annual event took place on Feb. 6 and 7 and is a combination of French Canadian and First Nations legend, which was told by lost canoeists along a trail in the ravine. The area was illuminated by colourful lanterns and artwork and two teepees offered tea and bannock. There was also music, a snow slide, and children’s activities near by at La Cite Francophone.

New fund at U of A for Aboriginal students

A new fund has been established at the University of Alberta to provide more scholarships, bursaries and awards for Aboriginal students. It will also enhance Aboriginal teaching and learning experiences and enable more programming to support the traditional and spiritual aspects of Aboriginal life. The Carl Amrhein Aboriginal Student Fund has already raised $500,000. Amrhein, who was U of A provost and vice-president (academic) over the past 12 years, was a passionate advocate, consultant, counsellor and friend to the Aboriginal community. More than 1,000 Aboriginal students from across Canada attend the U of A, which offers 34 different awards, scholarships and bursaries to Aboriginal students. “For me, (Aboriginal engagement) is the place where we have come very far, but it’s also the place where we have an enormous distance yet to go,” said Amrhein, who plans to continue a “blended career” doing research for the Conference Board of Canada, teaching and undertaking research for the U of A’s Faculty of Science, and continuing work with the Alberta government

Funding from Homeward Trust Edmonton will keep two youth warming and access centres open until April 30. The centres, operated by Youth Empowerment & Support Services and Boyle Street Community Services and opened since mid-December, tie into Homeward Trust’s winter emergency response strategy. Both Boyle Street Community Services and YESS Armoury have programming for high risk youth, as well as programming tailored for Aboriginal youth and youth engaged in high risk behaviours. To date, the Armoury has an average of 27 youth visiting a day, with a total of 1,111 youth drop-ins since it opened, while Boyle Street Community Services average between 30 and 40 youth during its operational hours. “The provincial youth homelessness plan and the final 2014 Homeless Count, both … reflect an ongoing need to support our homeless youth population,” said Susan McGee, CEO of Homeward Trust Edmonton. Homeward Trust is working toward a permanent Youth Hub, to open later this year. The Youth Hub will be part of a community strategy on youth homelessness in Edmonton that will complement and work within the provincial 10 year plan to end homelessness. The 2014 Homeless Count estimates a total number of 340 independent homeless youth (aged between 13 and 24) in the City of Edmonton.

More than 150 people working with Edmonton’s Aboriginal, refugee, immigrant and vulnerable youth populations attended a two-day training session related to trauma-informed care. The conference occurred just ahead of the one year anniversary of the Truth and Reconciliation Commission’s national event in Edmonton, which drew thousands of people affected by Canada’s residential schools and demonstrated the urgent need for trauma-informed practice. Opening keynote speaker was artist Aaron Paquette. Trauma Informed Edmonton is presented by the Urban Core Support Network and its partners: the City of Edmonton, Edmonton Police Service, Niginan Housing Ventures, and REACH Edmonton.

Edmonton to be second-site for APTN Aboriginal Day broadcast

The Alberta Women Entrepreneurs hosted an event in Edmonton on Feb. 11, where a panel of three discussed how to create a caring culture in the workplace. Nicole Bourque-Bouchier of Bouchier Group, Joelle McLaren of California Closets, and Margaret Adu of Aomega Lodges, discussed their core values and how they have translated that into a corporate caring culture for staff and clients. Such a culture, they said, is key to giving employees more than a job, customers more than a product, and suppliers more than a client.

Both locations will offer a day-long program of free family activities ranging from dance and music performances to live art installations, food samplings, and various traditional demonstrations. Wrapping-up the festivities will be a free main stage live evening concert featuring a stacked roster of Indigenous artists, followed by a fireworks send-off.

Edmonton was the start of cross-country dialogue on how social groups improve lives. The Canadian Institute for Advanced Research and Alberta Centre for Child, Family and Community Research presented a national dialogue series on social innovation entitled Change Makers: Catalyzing Innovative Ideas for Social Challenges. The series brings together researchers, practitioners and community leaders to tackle the toughest social challenges and generate fresh thinking that will improve lives.  The half-day symposium on Social Identity: The Creative Power of Groups to Improve Community Well-Being, was held on Feb. 5 and brought together experts in psychology and economics to share their findings on how social identity and belonging can beat depression, protect health and nurture well-being. Participating in Edmonton were Martin Garber-Conrad, CEO of the Edmonton Community Foundation; Franco Savoia, co-chair of the Alberta Inter Agency Council on Homelessness and director of Vibrant Communities Calgary; and Allan Undheim, vice president of community building and investment at the United Way of the Alberta Capital Region. “CIFAR fellows are forging new ways of understanding how groups drive creativity and well-being,” said Rebecca Finlay, CIFAR’s vice-president of communications and knowledge outreach. “This series will connect them with community leaders to catalyze innovative ideas in improving lives.”