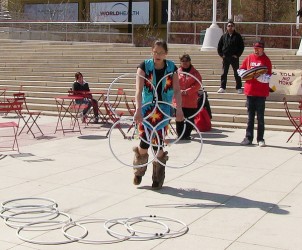 Kelsey Wolver performed a hoop dance in Churchill Square during Earth Day celebrations in May.

The Art Gallery of Alberta hosted Occupy the Gallery last month in which students from the University of Alberta provided art work that depicted signs with meanings throughout history. On show were signs ranging from the ‘60s popular peace sign to more recent iconic images from the Idle No More and Occupy protest movements. The show exhibited work done by students from Michael MacDonald’s class. MacDonald, who teaches in the Department of Music and the Department of Modern Languages and Cultural Studies at the U of A, asked his students to “use symbols and symbolic language to produce art, to use art as a type of laboratory to do social science research.”

Disinherited Generations: Our Struggle to Reclaim Treaty Rights for Thousands of First Nations Women and their Descendants by Linda Goyette, Nellie Carlson and the late Kathleen Steinhauer was launched in an honouring ceremony on April 12 hosted by the University of Alberta Press and the Provincial Archives.
Goyette, a former editorial columnist with the Edmonton Journal, collaborated with Carlson and Steinhauer on  the project for 10 years as writer and researcher. “The book is not only the shared life memoir of two remarkable women, speaking their life stories in the Cree oral tradition, but a history of their activism in the Indian Rights for Indian Women movement after 1968,” said Goyette.

Immigrants given information on Aboriginal people

Enhancing cultural understanding was the topic of a workshop hosted by the Centre for Race and Culture on April 20. Presenters were from the Aboriginal Relations Office and the Centre for Race and Culture and moderated by the Edmonton Immigrant Services Association and is part of a series of presentations titled “New to Canada? Things You Need to Know.”   The session helped to bridge the gap that sometimes exists between immigrants and Aboriginal people. Among the topics discussed were the history of Aboriginal peoples; myths and misconceptions; what are reserves, settlements and treaties; what Idle No More is about; and protocols and cross-cultural values. It is believed that understanding the differences and similarities between immigrants and the Aboriginal community can build a strong, cohesive community.

The Keepers of the Athabasca, Treaty 8 and University of Alberta Indigenous program hosted a Water Forum on May 2. At the heart of the discussion is the current government’s water rights legislation and policy (First In Time First In Rights), “which leaves First Peoples dead last in their legal rights to water,” said Jesse Cardinal of the Keepers. That policy together with the government push for water privatization and recent federal government legislation has further reduced First Nations environmental rights as guaranteed in the Treaties. The issues were discussed and plans for action examined, with Lewis Cardinal facilitating the discussion. Morningstar Mercredi’s film ‘Spirit of the Water’ film was screened in the evening. The film documents a diversity of voices for the Sacred Water- from traditional knowledge to First Nations ecological knowledge carriers to some of the best scientists. All speak passionately about the vital importance of water and their concerns for its future availability and quality for Aboriginal and Non-Aboriginal Canadians and for all living things.