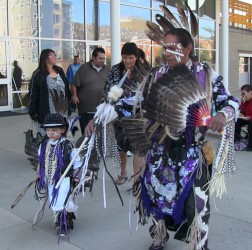 Eli Green and his grandson Noah Green were among the performers to entertain at the new Boyle Street Plaza in the inner city for Alberta Culture Days in September.

A permanent exhibit at Telus World of Science, created by a University of Alberta researcher in conjunction with the Canadian Circumpolar Institute, highlights the traditional knowledge of Aboriginal Elders. Elders as Scientists features the reflections of three Chipewyan Elders from the Northwest Territories, bringing a seldom-heard perspective to issues of climate change. The exhibit, located in the science centre’s Environment Gallery, draws on photos and audio recordings of the Elders taken during a traditional knowledge and science camp held in the Northwest Territories in the fall of 2012 and taps into an overarching theme of environmental change and helps address the question of how Elders make sense of environmental shifts happening around them. “This is one of the only exhibits in Canada that positions First Nations Elders as scientists,” said Brenda Parlee, a Canada Research chair based in the Faculty of Native Studies and Faculty of Agricultural, Life and Environmental Sciences, in an article from the U of A. “Aboriginal people are represented in museums, but those exhibits don’t necessarily speak to the value of Aboriginal knowledge in understanding environmental change. By taking in the exhibit, visitors have a chance to see into the past and see a part of Canada that is uniquely different from the urban experience of Edmonton.”

The Telus Centre’s Atrium at the University of Alberta is the premier site for Walking With Our Sisters, an international touring exhibition that is a commemorative art installation for missing and murdered Indigenous women. The project is increasingly becoming a form of justice by bringing together local community through art, ceremony and healing. In Canada, it is estimated that more than 600 Indigenous women and girls have gone missing or have been murdered in the last 20 years. Alberta has the second highest number of cases (behind British Columbia) in the country, accounting for 16 per cent of all the cases in the Native Women’s Association of Canada’s data base. In response to this issue, more than 1,700 pairs of moccasin uppers have been created by 1,200 people in honour and memory of these lost women and girls. Métis Elder Maria Campbell has guided the work, while Métis artist Christi Belcourt has been lead coordinator. Belcourt, also designed the stained glass window commemorating residential school survivors and which is in the House of Commons. Walking With Our Sisters will be in Edmonton Oct. 2-13. This large collaborative art piece is currently booked to tour more than 30 locations across Canada and the United States, over the next six years into 2019.

Actor Jimmy Herman, well known for roles in the movie Dances With Wolves and TV series North of 60, passed away Sept. 13, in Edmonton, at the age of 72. In 2005, Herman was honoured by Edmonton’s Dreamspeakers Film Festival Society with a plaque on its Aboriginal Walk of Fame. A member of the Cold Lake First Nation, Herman attended residential school and battled alcohol before taking up Aboriginal studies at Grant MacEwan College and going to work for the Native Counseling Services of Alberta. A father of two daughters with one grandchild, Herman had fallen ill for several months. A Pipe Ceremony took place on Sept. 19 at Sacred Heart Church of The First Peoples in Edmonton followed by a service to celebrate Herman’s life. He was taken home to Cold Lake First Nation to the Spiritual Centre for the wake and burial.

As the cost of food climbs in Edmonton at more than double the inflation rate, the Edmonton Community Foundation is offering up to $100,000 per year for three years to registered charities to tackle the problem of food insecurity. Vital Signs, a project of the Community Foundations of Canada, released its food security report earlier this month showing that the cost of groceries in Edmonton has increased from $133 per week for a family of four to $210 per week in 2013. “Poverty and food security are so intertwined,” said ECF spokesperson Carol Watson. The Edmonton Social Planning Council’s annual report on income, rents and other economic factors underscores the message that food security is a major issue and is connected to poverty.