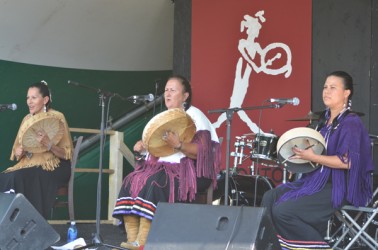 Singing about Creation and connections

The Iskwew Singers, (from left)  Fara Palmer is a Cree singer, Sandy Scofield is Métis from the Saulteaux and Cree Nations, and Krystle Pederson is also Métis and Cree, from British Columbia, performed a full concert and at several sessions during the Edmonton Folk Music Festival. The trio sang in the plains tradition about the connections between the earth, Creator, and each other. The Edmonton Folk Music Festival was held Aug. 8-11 in Gallagher Park.

Recognition Day for Treaty No. 6

Mayor Stephen Mandel proclaimed Aug. 23 as Treaty No. 6 Recognition Day, holding a special ceremony at City Hall and raising the Treaty No. 6 flag, which flew for a week. Another flag will become a permanent part of the City’s Aboriginal display inside. The occasion marked the one year anniversary of Mandel signing a historic Memorandum of Cooperation and Dialogue at the Alexis First Nation Pow-Wow. “Moving forward, it is important for the Chiefs of Treaty 6 to be more connected to their members’ way of life in the urban setting,” said Treaty 6 Grand Chief Craig Makinaw, in a news release.

Aboriginal Public Art Park to be first of its kind

The Queen Elizabeth Park Master Plan includes an Aboriginal Public Art Park, the first of its kind in North America. In coordination with the Edmonton Arts Council, a recognized Aboriginal curator will work with local and national Aboriginal artists on developing a vision for the park. This art park will set a precedent, encourage discussion and pro-actively acknowledge the history (and the future) of Aboriginal artists. The importance of the area as part of a gathering place for Aboriginal communities was emphasized by the Aboriginal community during city-led consultations. The Aboriginal Public Art Park is included in the second phase of development. However, this phase is presently unfunded. Park and Facility Development along with the Edmonton Arts Council will be putting forward a budget request in the next four-year capital budget cycle (2015-2018). It is anticipated that it will be known by December 2014 if funding is available for Phase 2.

Shaun Hains, an assistant principal with Edmonton Public Schools, is the recipient of the Canadian Teachers’ Federation’s Outstanding Aboriginal Educator Award. Hains has supported Aboriginal students and developed Aboriginal education for more than 30 years. A trained psychologist, Hains piloted and researched teaching strategies to facilitate learning for both Aboriginal and special needs students. She was nominated by the Alberta Teachers’ Association. “I believe that Aboriginal people have a certain lens to see certain gifts, and we share that lens with our colleagues,” said Hains, in a news release. “I was able to really listen to students who wanted to learn.” The previous year, Hains was the recipient of the First Nations, Métis and Inuit Education Council’s Outstanding Aboriginal Educator in Alberta Award.

Conference to examine the cultural context of trauma

The Boyle Street Plaza will be the site of a training conference examining the Cultural Context of Trauma. Participants will examine their own understanding of healing and the role they play in facilitating this process in the context of trauma. Historical and intergenerational trauma is prevalent in Edmonton’s Aboriginal, immigrant and refugee populations and finding ways to move forward and heal the generations is a priority. Understanding the Cultural Context of Trauma is crucial for all helping professionals since Edmonton has one of the fastest growing Aboriginal, immigrant and refugee populations in Canada. The conference, to be held Oct. 16-18, will include a half day informational session presented by Blue Quills College on Historical Trauma in the Aboriginal Community, focused on the local context in the Edmonton area. The conference is facilitated by Urban Core Support Network, a multi-sector network of social advocacy organizations, businesses and government agencies in Edmonton dedicated to social justice, equal opportunity and inclusivity.

Teaching off the land part of U of A curriculum

The University of Alberta’s Faculty of Native Studies
formalized an agreement with the Northwest Territories-based institution Dechinta Centre for Research to provide curriculum, which combines academic tradition with land-based, Indigenous knowledge in the rugged wilderness of the Canadian North. The memorandum of understanding follows a successful three-year pilot project between the two partners, formally bringing land-based Northern learning into the academic mix. The partnership develops a framework for undergraduate students from both institutions to receive instruction in bush settings through land-based, hands-on learning. “The agreement with Dechinta builds on our links to Northern communities and expands the learning experience for students,” said Brendan Hokowhitu, dean of native studies at the U of A. “Teaching off the land allows a different kind of teaching, connecting to the land spiritually, physically and mentally.”