An emerging Métis voice on the music scene 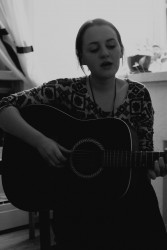 Playing at the Edmonton Folk Music Festival is a dream for many local musicians and is one that came true for singer/songwriter Ella Coyes this past August.

Coyes, 18, performed as part of the School of Song, a group of young musicians under the mentorship of Rhea March.

“I’ve attended for a few years, and my mum was the first to remember me telling her that I would perform on that stage one day, mostly in jest. It was a huge learning experience and I was so humbled by the performers, stage managers, tech crews, and the volunteer power,” said Coyes, who lives in Sturgeon County.

Coyes has been writing songs for a couple of years and has come a long way in a short period of time. Her Folk Festival performance was impressive for someone who took a music class in high school and found the experience of singing in front of the entire class at the beginning of the term to be “absolutely terrifying.” At the same time, she says that first performance made her realize that “I loved the rush, as well as the conversation that performing creates.”

Meeting Rhea March was a huge turning point in Coyes’ emerging career. They met at Cha Island, a coffee shop just off of Whyte Avenue in Edmonton, where March hosts a Sunday song stage.

“Having a connection with Rhea has not only been valuable professionally, but personally as well. She’s provided guidance and wisdom in regards to what I call ‘the grind’ - the parts of being a musician that no one really tells you about until you experience it firsthand. As a young performer and person that has been so incredible helpful,” said Coyes.

Coyes’ Metis background, as well as traditional Canadian folk, have been strong influences on her music.

“The Red River Jig was one of my favourite tunes, and continues to be to this day,” she said. “Besides that, I think that growing up with traditional Canadian folk music was critical to my way of thinking. The song writing process is very personal to me, but once a person hears the music I’ve written I no longer consider it mine in a sense, and I think that came from growing up with Metis music.”

Coyes would like to put out a full length album within the next couple of years and do the festival circuit next summer.