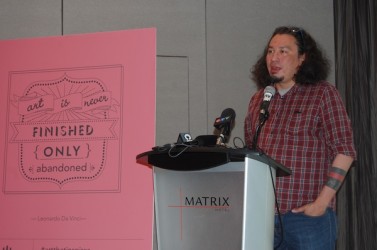 The Aboriginal offering at this year’s Works and Arts Design Festival are entitled “No Rhyme or Reason.” Aptly named, says curator Terrance Houle, as it is a reflection of who he is.

“It speaks a lot to engagement, and engaging a public…. The show deals with a lot of gender roles, a lot of historical roles, history, society, a lot of it deals with human interaction,” said Houle.  “It has an array of ideas and theology so for me it’s something I’ve always strived to in my own work, not to just have one sort of thing presented but to have several ideas and levels of ideas so people can walk away with something.”

Houle combined the performance element and video element in keeping with the theme of “Human Energy,” for the 28th annual The Works, which takes place from June 20-July 2.

This is the fifth year The Works has run its Canadian Aboriginal Artist program.

“The voices of that program are brought in and really integrated into the festival, particularly at the main site,” said Amber Rooke, executive artistic director.

The main site for The Works is downtown at Churchill Square, but the festival has 31 sites throughout the city with 53 exhibits. Last year, 372,000 people attended.

Houle has been involved with The Works for the full five years of the Canadian Aboriginal Artist program. Last year, his Calgary-collective Indigeneity exhibited its work.

“I’m so happy (the program) is still going hard, going strong with The Works and that they’re bringing in these amazing artists to still make it work,” he said.

Perhaps the most visible Aboriginal contributions are the north and south gateways at Churchill Square.

“I’m really excited about Sonny Assu doing an archway,” said Houle. “He is an amazing artist.”

Assu, of the Ligwila’xw of the We Wai Kai First Nation from Cape Mudge, BC, and Jeffrey Veregge, of the Port Gamble S’Klallam Tribe, provide a mash-up of west coast Aboriginal design elements, pop culture iconography and historical moments in Aboriginal culture. Assu’s north gateway features images titled 1986 #1 and #2, which are references to the final closing of residential schools in Canada. Veregge’s south gateway features Marvel Comics characters Wolverine and Hulk. His gateway is entitled #181, which is a reference to the issue of the Hulk comic book in which Wolverine first appeared.

“I’m pretty proud and privileged to be presenting these works. These are national and international artists. I curated this with the idea of people who inspire me as a performance artist and that I would feel would really mesh well with The Works,” he said.

Also on display in a tipi set up near the Alberta Art Gallery is work of young Aboriginal artists.

Houle says having art, both Aboriginal and non-Aboriginal, free to the public and easily accessible is one of the unique aspects of The Works, which is the largest, free outdoor festival of its kind in North America.

Last year, Houle was involved in 30 showings in Canada and the United States. This year promises to be just as busy.

Following The Works, Houle is heading east. The National Gallery in Ottawa is displaying images from his Urban Indian series on a billboard, which rotates through five of the images. He will have a series of works on display for six months at the Concorde Art Gallery in Montreal. Next he will be at Museum of Civilization with another series of photos.  At Viva Art Action, in Montreal, he will be doing a performance with Ulysses Castellanos and Cap Gordon. He is also at the National Indian Leg Wrestling League of North America which opens in North Bay, in the fall.

“That’s all peppered with a bunch of other stuff,” he said. “I’m getting into music.”

Houle will be writing his first three songs at Markham, which are slated for heritage buildings.

Houle is a Blackfoot and Saulteaux man of the Blood tribe.

Photo caption: Terrance Houle’s new role in this year’s The Works has him as curator for the Aboriginal artists’ contribution.