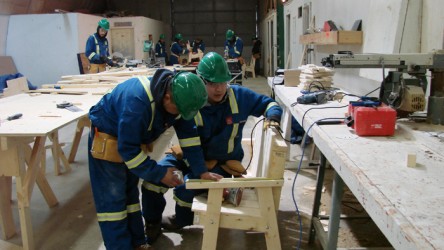 A partnership between Whitefish Lake (Goodfish) First Nation and the Christian Labour Association of Canada is helping Whitefish Lake members get into the trades.

Whitefish Lake First Nation approached CLAC to ask if the organization would be interested in developing and delivering a training program for the construction industry, said Warren Kootenay, Aboriginal initiatives coordinator with CLAC.

“CLAC believes that by training and putting Aboriginal people to work, we are helping to build stronger families, better communities, and in turn, a better Canada,” said Kootenay. “CLAC also recognizes that the Aboriginal community remains one of the largest untapped and underutilized resources in Canada for the development of skilled labour. We need to continue working together to develop partnerships that put Aboriginal people to work.”

After successfully completing the program and passing an alcohol and drug test, students are placed with the training program’s partnering companies, and after a three month probationary period are often hired on full time. To date, CLAC and Whitefish have partnered to deliver three pre-employment construction and pre-employment scaffold training programs in the community. The fourth began Feb. 23 and will be completed on May 22.

The student selection process is handled by the Aboriginal community, which also seeks funding for the programs through such resources as Alberta Human Services and Alberta Works. At Whitefish Lake, applicants were pre-screened by the community’s training and employment department. CLAC was invited to be on the selection committee, Kootenay says, as were other key partnering companies.

“Our program is designed to open the employment door. Partnering companies that are involved in the training program understand fully that students are as green as grass with, for the most part, no work history in the construction field,” said Kootenay. “The program gives students a chance at employment, and when they are finally placed in their job placements, it is now their opportunity to work hard and show the company that they are worth it and that they will make a great employee.”

The retention rate in CLAC’s AIP programs has been around 55-60 per cent, a number that is dropping because the low price of oil has forced industry layoffs.

“Our measure of success is not based on how many students have gone through our training program - it’s about how many have found long-term employment at the end of it. Our program will follow a student for a year to ensure they have the support they need to become long-term employees of the company,” Kootenay said.

Kootenay also emphasizes that the feedback from both students and industry partners has been positive. “Our students, who are fortunate to find a company that works for them, their lives have been changed for the better. For our companies, they are grateful for the trained workers that learn the necessary skill sets to be successful at the entry level and are committed to the learning process,” he said.

“Our message to our students is you can make a pretty darn good living working in the trades and if you work hard enough it may just turn into a meaningful long-term career.”