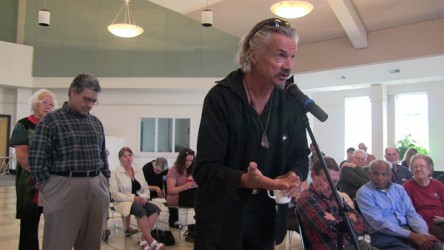 Pipeline consultation processes in Canada need to be scrapped and rebuilt from the ground up to include First Nations at the table.

The panel at the discussion forum “Bitumen and Pipelines: What Do These Offer Canada and the Environment?” included NDP National Caucus Chair Peter Julian, MP for Burnaby-New Westminster and Shadow Cabinet Minister for Energy and Natural Resources; Mike Priaro, a retired petroleum engineer; and, Roland Le Fort, president of Unifor Local 707, Suncor Unit, in Fort McMurray.

“We’re not seeing a two-way dialogue. We’re not seeing a change in policy reflecting the concerns of the people involved,” said Johnny Blackburn, a tradesman currently working in Alberta’s oil sands, focused on how little input Aboriginal groups of have in oil development. “Is there anything we can do to improve this policy within the framework we have now or do you think it is best to scrap the policy and rebuild it?”

“It needs to be scrapped and rebuilt. There is no real consultation process now in this country,” said Julian, accusing the federal government under Stephen Harper’s leadership of “gutting” the process. “The first line of defense is shutting down the ability of First Nations or any other Canadian to intervene, even to have their voice heard in the process, unless they are willing to go through days and days of red tape.”

Forum organizer Jim Graves, an engineer who does consultation work with Aboriginal groups, asked the panel about ways in which there can be an energy strategy in Canada that respects the sovereignty of First Nations. He noted that First Nations are connected to the land through identity and livelihood, and that the treaties entered into with Canada were about sharing that land.

“If all the land is taken up for purposes of exploitation of the resources, how exactly can the First Nations expect that their sovereignty of that land is being respected when the land is completely being destroyed?” he asked.

“Any national energy strategy that we put into place has to take into consideration that duty to consult, which means the involvement of First Nations and First Nations communities,” he said.

Julian also stated that the federal government must ensure First Nations communities, particularly isolated ones in the north, have the “tools they need to use clean energy to further the economic and environmental development of their communities.”

“There needs to be a vast improvement in the kind of consultation that happens between the oil industry, and not just with the First Nations, but all citizens,” said Priaro, who authored a study calling for a “Canada-First” Canadian Energy Strategy. He spoke out strongly against the Northern Gateway pipeline proposal both in his study and at the forum, and believes it will not become a reality largely because of its potential environmental impact and public opposition, particularly from First Nations who live along the proposed route.

“The way I see it, the First Nations in British Columbia are pretty much legally sovereign and they probably have the legal right to turn down a pipeline through their lands,” he said.

“Northern Gateway is an example of a worst practice,” said Julian, adding that Enbridge, with the federal government’s support, did not consult with the First Nations properly and is now “trying at the last minute to do damage control.”

The forum was organized by the NDP Edmonton-Leduc Electoral Riding Association, which periodically holds public discussions on a variety of contemporary topics. These forums are free to attend and open to the public, regardless of political affiliation.