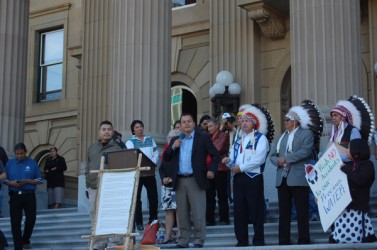 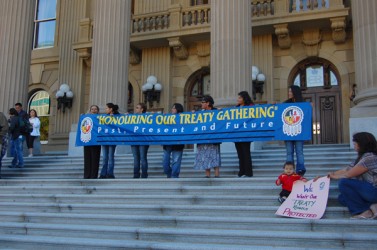 Chief Allan Adam announced in front of a loud and boisterous crowd of over 500 that the Athabasca Chipewyan First Nation will be taking court action once more, this time challenging the provincial government’s Public Lands Act in order to protect treaty rights.

“We’ve had enough,” said Adam, speaking from the steps of the Alberta Legislature on Sept. 26. “We’re standing up here because we’re tired of being trampled on. We’re tired of them suppressing us.”

The Public Lands Administration Regulation, which provides new regulations for the Public Lands Act, was the focus of much concern and ire. Chiefs contended that the province’s newest piece of work violates Treaty Rights and the First Nations’ ability to move freely on the land, to hunt, harvest or fish.

Lack of consultation was also a point of contention.
“The provincial government must consult on all issues. That’s not happening. One phone call is not consultation,” said Treaty 6 Grand Chief Cameron Alexis.
He added that PLAR was a “direct violation” of Section 35 of the Constitution which protects existing Aboriginal rights.

“We do not refuse consultation or discussion. We want to participate in the most meaningful dialogue over the consultation policy,” said Richard Kappo, Grand Chief for Treaty 8. He outlined the process which followed the provincial government’s release of its consultation policy in 2005. The Assembly of Treaty Chiefs objected to that policy, which went through a few years of changes. When the province responded to AOTC concerns it was to reject what the AOTC had to offer.

Driftpile Chief Rose Laboucan received the largest applause when she called on the federal and provincial governments to give the First Nations people their proper due.

“We do not want (Canadian) taxpayers’ dollars. We want our own money from our resources,” she said. “If this government would honour the Crown and do revenue resource sharing by all the provinces and this country, then we wouldn’t have to argue and go back to the table and try to get more money for education or health or anything else. We would have our own money.”

The plight of First Nations people was outlined by numerous chiefs who said treaty promises were not being honoured  as First Nations suffered from lack of education, lack of housing, lack of economic development, and lack of health care services.

Signs at the foot of the Legislature steps echoed those sentiments: “Save our future,” “Honour your promises,” “Treaty rights are forever, as long as the sun shines, the grass grows and the rivers flow,” “Canada’s shame, 3rd world living conditions on Canadian reservations,” “We want input in consultation policy,” “We want housing addressed.”

“If we do not fight for our rights, if we are not vigilant against government assault on our rights…then we are failing in our responsibilities to our communities, our youth, our future generations,” said Tsuu T’ina Chief Sanford Big Plume. The previous week, Tsuu T’ina First Nation hosted the seventh annual Numbered Treaty Gathering for Treaty 1-11 First Nations. The three-day gathering focused on creating opportunities for the First Nations to work with the federal government toward the full implementation of the treaties.

The rally, dubbed Day of Awareness, was the result of a resolution passed by the AOTC in June. It also coincidentally corresponded with a similar rally at the Saskatchewan Legislature, undertaken by the Federation of Saskatchewan Indian Nations. In Ottawa, on Parliament Hill, First Nations also took part in a demonstration against tar sands development in Alberta.

Federal New Democratic Party member for Edmonton Strathcona and Aboriginal Affairs critic Linda Duncan and provincial NDP leader Brian Mason both took the microphone and pledged to work for First Nations. No one from the provincial or federal governments was in attendance.

Shawn Atleo, National Chief of the Assembly of First Nations, was in Edmonton for the peaceful rally. Atleo echoed comments made by the chiefs that strength came in numbers and in unity. Atleo said that it is the people that are pushing the leadership and moving the issues forward.

“Our people are saying this injustice is no longer okay and we will step forward and we will even use tools of mainstream democracy, like rallies in front of legislatures, to make sure that our voices are going to be heard,” said Atleo.