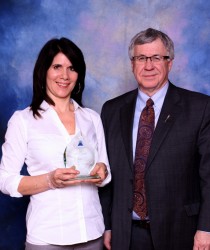 As a child, Carrie Langevin spent many hours at her grandmother’s side gathering plants and berries and learning the ancient Aboriginal secrets of healing and nutrition. Out of those lessons came a deep understanding and appreciation for the natural benefits of many native plants.

That experience evolved into a vision for her future, and today, Langevin is living the dream. Along with her husband and fellow-educator, Darrell Langevin, Carrie parlayed her grandmother’s teachings into a successful business called Mother Earth Essentials.

It wasn’t easy, and it didn’t happen overnight, but dedication and hard work helped Langevin earn the 2013 Business Award of Distinction for Aboriginal Woman Entrepreneur from the Alberta Chambers of Commerce.

“It is great to be honoured,” said Langevin. “The reality is that our world is filled with men in business and leadership, and Aboriginal people are the fastest-growing group of entrepreneurs.”

Mother Earth Essentials brings sacred Aboriginal traditions of nature to the international marketplace, featuring organic lotions, soaps, teas and salves made from such plants as sage, sweetgrass, wild mint, wild rose, wintergreen and cedar. Most of the plants used in the products are grown and harvested around the couple’s property in Lac Ste. Anne County.

Started seven years ago, the business initially offered a few soaps, teas, candles and lotions at trade fairs and online. As their reputation and production capacity increased, so did their reach. Today, the full line of more than 60 products is available online and in some retail locations across Canada. They also produce a hotel amenity line for the Sawridge and other hotels.

Carrie and Darrell recently opened their first retail location, Mother Earth Essentials at 12306 111 Ave. in Edmonton. Excited about the new venture, Carrie said that in addition to their product lines, the store will offer medicinal plant workshops, Cree classes, traditional crafts and more in a workshop area.

The path has been a winding one for the woman who was inspired by her grandmother. Even while she was sharing the Aboriginal secrets, Langevin says, her grandmother didn’t express pride in her Aboriginal roots. “She came from a generation that had lost its children to the residential schools. She would say ‘don’t tell anyone.’”

Langevin’s love of all things herbal led to cosmetology school after high school, followed by jobs in cosmetics and a stint at the Sawridge Hotel, where she helped start the spa. After her children were born, Langevin went back to school to study health education, and started her 20-year career as a teacher. “I went to work at Amiskwaciy, and there they had all the plants growing out back.”

Langevin recognized the importance of using the plants to engage the students in their culture in a way they could be excited about and proud of. “We made teas and fun things, and taught foods as well. We could get creative with some of that stuff.”

Sharing her wealth of Aboriginal knowledge with young people gave new energy to Langevin’s old dream. She worried that it would be disrespectful or that people wouldn’t take her seriously, but Darrell’s support made all the difference, she said.

In December 2010, the couple made a pitch for their business on the popular TV show Dragons’ Den. “It was very much an honour,” said Carrie. “Suddenly you’re more credible because you faced the Dragons. They generated a lot of traffic to our website.”

The Dragons offered them a loan, but Carrie and Darrell didn’t like the terms so they declined it. Still, it was good exposure for the business. “We never used to get any orders from the east, but now we get lots of them. I can tell when they air a rerun because we get a little spike in sales.”

Langevin hopes her business award will inspire young people to follow their dreams. “It sounds clichéd, but I think I’m living it. There’s never a day when I’m not excited about what I do. I love sharing that with the youth.”