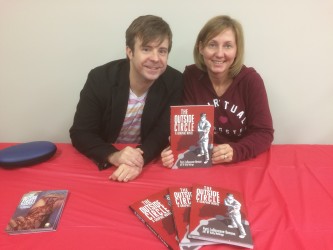 A new graphic novel tells a strong story about a young Aboriginal man who breaks away from gang violence, but not before ending up in jail.

The Outside Circle, written by Patti LaBoucane-Benson and illustrated by Kelly Mellings, begins with Pete and his mother’s boyfriend Dennis. The two men fight and Dennis ends up dead and Pete goes to jail. Even in prison, Pete manages to keep up his gang ties until a brawl there makes him realize he has been a bad influence on his younger brother Joey. Pete begins a process of rehabilitation which includes traditional Aboriginal healing circles and ceremonies.

Author Patti LaBoucane-Benson is Métis and the director of research, training, and communication at Native Counselling Services of Alberta. She has a Ph.D. in human ecology, focusing on Aboriginal family resilience, and says that The Outside Circle is her doctoral dissertation in graphic novel form.

“When I completed my Ph.D., my examining committee encouraged me to publish my dissertation. But at that time, writing for academia was something I was not very interested in,” said LaBoucane-Benson, who lives in Spruce Grove. “I wanted to engage a broader Canadian audience in the work that I had been doing. I am also a fan of the graphic novel genre. So, after a few months, I decided to work on a graphic novel that would feature a story that was grounded in my 20 years of work experience, as well as the findings from10 years of graduate studies.”

Graphic novels are embraced by youth and young adults, and LaBoucane-Benson has aimed to engage readers in these age groups. The Outside Circle has also been well received by older readers, according to LaBoucane-Benson, because the graphic novel can be read in one sitting resulting in the reader quickly feeling the entire impact of the story.

“I hope to engage all Canadians in a dialogue about historic trauma, the over-representation of Aboriginal people in jail, as well as hope, healing, and reconciliation,” she said.

LaBoucane-Benson asked artist Kelly Mellings to work with her on The Outside Circle after working together on legal education comic book projects at Native Counselling Services of Alberta.  Mellings lives in Edmonton and is an award-winning art director, illustrator, and designer, who co-owns the design firm Pulp Studios. LaBoucane-Benson says she would like to work with him on future projects.

Most of all, she says, she wants to communicate through The Outside Circle that “the over-representation of Aboriginal people in the Canadian criminal justice system doesn’t have to continue. By supporting individuals to develop a positive sense of Aboriginal identity, reconcile relationships, and self-determine their own healing path, the intergenerational transmission of trauma and the cycles of incarceration can be stopped.”

The Outside Circle is published by House of Anansi Press and available in book stores and comic shops.

Photo Caption: Author Patti LaBoucane-Benson (right) and artist Kelly Mellings launched their graphic novel The Outside Circle at the grand opening of the comic store Variant Edition in Edmonton on May 2.