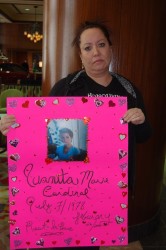 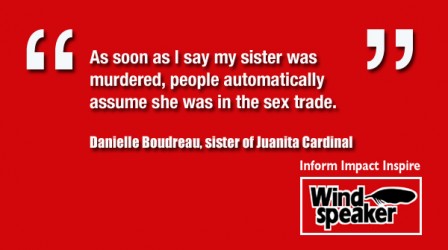 On a personal level, Danielle Boudreau is hoping to get a permanent grave marker for her sister.

“My sister doesn’t have a headstone because we can’t afford a headstone. She’s still going unnoticed even in her last day,” said Boudreau, who is Metis from the St. Paul/Saddle Lake area.

On a wider level, she is hoping that a national inquiry into murdered and missing Indigenous women will meet the needs and bring closure for the many, many family members impacted by the tragic loss of a loved one.

Photo: Danielle Boudreau with a poster of her sister, who was murdered in 2006. Her family has yet to get closure because the woman that killed Juanita Cardinal was never charged.
(Photo: Shari Narine)

Boudreau was among the many immediate family members to meet with Northern Affairs Minister Carolyn Bennett on Thursday.  Bennett’s stop at the River Cree Marriott was her 16th pre-inquiry meeting as she crosses the country to get input as to what the national inquiry needs to accomplish and how it can best meet those goals while caring for the families, who tell their heart-wrenching stories.

“For the families, my heart is with all of the people here. I’ve seen the tears, the hugs, the smiles. The group we all belong to. It’s like a group we don’t want to belong to,” said Boudreau.

Boudreau knows she could easily have been counted among the 1,200 murdered and missing Indigenous women. She led a lifestyle of drugs and sexual exploitation. Instead, it was her sister, Juanita Marie Cardinal, who worked in a pad thai restaurant, who was murdered in 2006.

“As soon as I say my sister was murdered, people automatically assume she was in the sex trade,” said Boudreau.  “That’s exactly the stigma we, as Aboriginal people, live with.”

And that stigma has been voiced as a reason for concern, says Bennett. She has heard stories of reports of missing women not being taken seriously; searches being delayed; investigations not getting full attention; and, lack of communication between the police and families.

In the pre-inquiry meeting on Enoch Cree Nation, Bennett says there was much talk about survivors, with people referring to themselves as survivors of the street or survivors of the child welfare system. Concerns were also voiced about the role of the police, whether lack of funding limited the time and energy police put into cases, or whether police didn’t care enough to take complaints of missing Indigenous women seriously.

Bennett said she also heard a concern common to that voiced by people in the Northwest Territories: lack of safe spaces to receive culturally-based trauma support.

Boudreau says she appreciated the opportunity to talk to Bennett and was able to stress with the minister the importance of educating youth about respecting others and understanding that buying sex and selling sex is wrong.

“It’s so important to let people have that chance to speak, to have that glimmer of hope,” said Boudreau.

“I think what we heard from the families across the country is that this is very important to them that they get to speak directly to the people who hopefully will be able to make the changes necessary to stop this tragedy,” said Bennett. “I’m honoured that they are trusting me with their stories.”

Bennett was joined by Status of Women Minister Patricia Hajdu in Calgary on Friday for another pre-inquiry MMIW meeting.