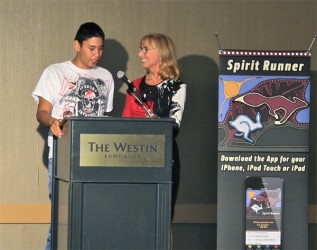 Some more screen time might end up being the secret to getting Aboriginal youth across the country more physically active.

At least that’s the goal of Don Patterson and Janice Ryan, who helped design the Spirit Runner app.

The free iTunes app runs on the iPhone, iPod touch and iPad. Some of the features of the app include an activity log, schedule maker, motivational quotes, GPS tracker, step counter and reward system.

Patterson, a 59-year-old lawyer and realtor who now lives in Mississauga, Ont., had cycled across Canada last year to raise funds for the YMCA and to create awareness on the importance of keeping youth active.

After meeting with sporting officials in his hometown of Edmonton last fall, Patterson felt it was best to target Aboriginal youth with the creation of Spirit Runner.

“The obesity and diabetes rates are horrific in the Aboriginal community,” said Patterson, who is the app’s executive director. “This is all prevention if we can help kids at this stage. It’s a fraction of the cost on the crime side and from the health side. The costs if we do nothing are staggering.”

Though older youth can also use the app, it is targeted for those aged nine to 14 years.

“We wanted to develop a terrific app to help them get active,” Patterson said. “Our next step was to see if we can partner with other groups to take it to the next step.”

The answer would appear to be a resounding yes.

“We’re being contacted by all sorts of Aboriginal groups now,” Patterson said. “We’re now working with some sports organizations who can deliver sports programs.”

Those who are in favour of the app are former Olympic gold medallist Beckie Scott and ex-National Hockey League player Brantt Myhres.

Scott spearheads Ski Fit North Alberta, a cross-country ski program that promotes healthy lifestyles. Myhres is the CEO of the Greater Strides Hockey Academy, which is hoping to start an Aboriginal school/hockey program in Alberta.

Ryan, Spirit Runner’s project director, said it only makes sense for youth to have a technological touch in efforts to get them more physically active.

“These kids need an app,” said Ryan, an Edmonton resident who besides being a writer and actor is also a strong believer in active living. “They’re into technology. They’re very technically driven.”
Testing for the app started back in April. Those who offered their opinions included youth from the Ermineskin Cree Nation,  Aboriginal students from Edmonton’s Boyle Street Education Centre and members from an Edmonton-based inner-city Aboriginal group Crystal Kids.

“All of their feedback was instrumental in how we developed the app,” Ryan said.

There’s also another Aboriginal connection to the app. Jessica Desmoulin, an Ojibwe artist who lives in Edmonton, designed the Spirit Runner artwork. The combination of hare and fox means young and spirited, with the hare representing the female spirit and the fox representing the male spirit.

And yet another reason why the app launch was staged in Edmonton is because the city-based Fission Media, a mobile development company, designed the app.

Besides being available through iTunes, the app can also be accessed through www.spiritrunnerapp.com.