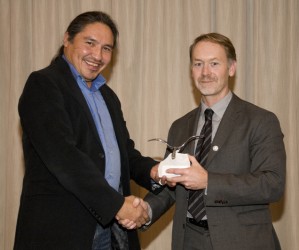 Chief Allan Adam of the Athabasca Chipewyan First Nation has been recognized by a national environmental organization for his fight against the rapid oil sands development near his community.

“It caught me off guard to win this award,” said Adam. “It’s an award that belongs to the Athabasca Chipewyan First Nation.”

Adam was one of five recipients of the annual Boreal Awards presented in Ottawa at the Canadian Boreal Institute’s Leadership Council’s gala on Nov. 24.

The awards recognize leadership, innovation, and excellence in individuals who have made a contribution to the protection of the Boreal region.

Adam was honoured for his public plea to slow down oil-sand developments because of the environmental damage and consequences to his community’s health.
“It has had a drastic impact on our way of life and we have to continue to fight. If I feel that there is something terribly wrong, someone has to champion it until the results come forward in a positive direction,” said Adam.
His northern community is only a few kilometers down stream from the development.

“The environmental destruction is visible. There are low water tables, deformed fish that local fisherman are catching, and even results from studies by industry that say there are high levels of arsenic in moose meat,” said Adam.

Larry Innes, executive director of the Boreal Leadership Council, said Adam was nominated because of his determination to raise awareness about the issues facing his community.

Last fall, Adam’s fight caught the attention of Hollywood film director James Cameron who was inspired to also publicly state his concern over the speed in which developers have been extracting oil.

“On behalf of the people, (Adam) represents a sense of their struggle and their sense of the world that is very powerful,” said Innes. “He deserved to be singled out as an individual for working on behalf of his community.”
Innes said award recipients were chosen by the Boreal Leadership Council, an advocacy group that strives to protect the boreal region by minimizing environmental footprints and ensuring community values are respected and protected.

The council is made up of conservation groups, Aboriginal organizations, resource companies and financial institutions.

Although Adam was honoured to be recognized by such an organization, he says it’s too early to celebrate.

“When I look at it from a different perspective, winning awards doesn’t mean that we won the battle. The battle still continues,” he said.

Innes hopes the small token of recognition encourages Adam to continue his work.

“You can imagine the day to day job, not only of being a chief in a community but a chief in a community that experiences such tremendous pressure,” said Innes
“I doubt it makes things easier but hopefully it gives him a sense that his contributions are valued by others and will lead to some positive changes.”