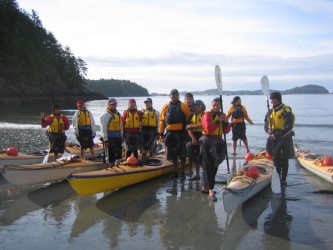 Horvath, an Aboriginal liaison teacher at Canmore Collegiate High School, started the Stoney Adventure Group Experience program at the school three years ago. The partnership with Outward Bound Canada is designed in part to help increase the graduation rates among the Nakoda students at the school.

“The graduation rates for First Nation students are abysmal,” said Horvath, an Ojibway who hails from northern Ontario.

This year the Canmore school has about 35 students from the Stoney Nakoda First Nation, located 40 kilometres east of Canmore, 14 of whom are participating in SAGE. That’s a slight increase from a year ago when 12 took part and the 10 that participated during the pilot project during the 2008-09 school year.

The SAGE program runs during the entire school year with as many activities as possible spread throughout the 10 months to keep students interested in school.
Activities are varied and have included rock climbing adventures, mountaineering excursions, and a week-long retreat at a wilderness centre in British Columbia.

“The more they can see what is out there, the greater they’ll be motivated to achieve in what they have to do,” Horvath said.

Not all of the Stoney Nakoda students at the school are interested in the program.

Other interests Horvath is pursuing are both business and theatre arts programs.

So far the SAGE program has helped the Aboriginal students feel more welcomed at Canmore Collegiate.
“The students feel they belong in the school,” Horvath said. “And they’re proud of where they are from.”

The SAGE program, however, is not strictly an extracurricular activity. It is being offered as part of the school’s curriculum, with those in the program working towards a wilderness skills credit.

The idea for the SAGE program came to fruition after one of his former co-workers, Julian Norris, the innovation director for Outward Bound Canada, told him about other Aboriginal programs the company had assisted with previously.

“He thought our school would be great for it,” Horvath said.

Thanks to a $30,000 anonymous donation, the SAGE program was able to operate during its inaugural year.
Horvath is hoping the program will continue to grow.
“The biggest hurdle is funding,” he said.

The program can become rather expensive, especially when a trip to B.C. is factored in.

“It’s $150 per student per day for a week-long program,” Horvath said.

Last year’s trip was possible in part thanks to the $10,000 raised at a community fundraiser. This year’s event raised $13,000.

Also, Horvath said Outward Bound Canada officials are working on getting the program some additional grants.

Photo Caption: A recent expedition for the SAGE program took students on a seven-day sea kayaking trip in Clayquot Sound on the western coast of Vancouver Island.